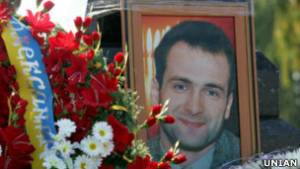 Remembrance gatherings were held in Kyiv and other cities on September 16 for slain journalist Georgy Gongadze and other journalists in Ukraine who died while carrying out their work.

According to Telekritika journalist Svitlana Ostapa there were far more journalists and others present this year than last at the gathering in Kyiv. Those taking part including a representative of the President’s Administration, the newly appointed Ukrainian Ambassador to Canada and many well-known media people.   The names of 61 journalists who were killed while carrying out their work were read out, together with journalists and other media workers who have died defending their country in Donbas.  Those present remembered also the six foreign journalists who have died in Donbas. 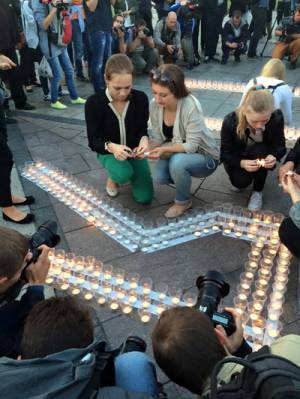 Speakers were critical of the new government as well, saying that crimes against journalists remain unpunished. Of several hundred attacks on media workers in 2014/15, only a few have been investigated.

Nor, of course, have those who ordered the killing of Gongadze been even publicly named, let alone brought to justice.

On the eve of this fifteenth anniversary, Myroslava Gongadze, the journalist’s widow said that there was now a chance to find those who ordered her husband’s killing.  It is therefore rather worrying that the appeal hearings over the conviction of former police general Oleksy Pukach keep being postponed.

In Jan 2013, Pukach was sentenced to life imprisonment for his role in the murder of Gongadze.  The investigators found (controversially) that Pukach had carried out the murder on instructions from Yury Kravchenko, the then Interior Minister who is officially recorded as having committed suicide (with two gunshot wounds to the head) in early 2005.

Ukrainska Pravda reported at the time that Pukach’s final words in court could be seen as acknowledging that former President Leonid Kuchma and the then Head of the President’s Administration, later Parliamentary Speaker Volodymyr Lytvyn were implicated in the journalist’s murder.

Asked by Judge Melnyk if he agreed with the sentence, Pukach replied: “I’ll agree if Kuchma and Lytvyn are in this cage with me”.

“I told them everything during the investigation and the trial, but only Fedur in this court wanted to know the truth”, Pukach said.

As reported here, much was made in early 2011 when criminal proceedings were initiated against Leonid Kuchma over the Gongadze case.   Optimism that progress would finally be made on identifying those who ordered the journalist’s killing soon fizzled.  By October 2011, the Constitutional Court had ruled that evidence could not be used that had not been legitimately obtained by an investigative body.  Melnychenko illicitly taped conversations in the President’s room.

The entire Pukach trial took place behind closed doors with all lawyers, including those representing Myroslava Gongadze severely restricted in what they could say.

Portrait from BBC, the remembrance gathering from Telekritika