Schoolchildren forbidden to speak to each other in Crimean Tatar 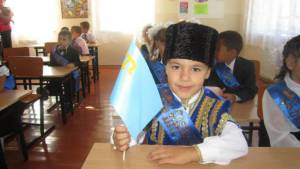 According to their parents, students at one Crimean school have been prohibited from using the Crimean Tatar language to communicate among themselves, despite the fact that the school is in a village where Crimean Tatars constitute 70% of the population.  A man was recently also threatened with dismissal if he spoke with clients in Crimean Tatar.

The newspaper Avdet reports one mother as saying that her daughter had turned to another young girl during a lesson in the Crimean Tatar language. The teacher responded by demanding that the girls speak Crimean Tatar during the relevant lessons, and Russian during her classes. The teacher claimed that for all she knew they could be swearing.  The young girl asked her mother what to do and was told to continue speaking her own language to friends, and to use Russian when talking to the teacher.

When the mother complained, she was told she could send her daughter to another school in a neighbouring village, ten kilometres away.

Well-known human rights defender Olha Skrypnyk is clear that such measures are entirely unlawful, with them being in breach, among other things, of Russian legislation.  She points out that the discrimination of both Crimean Tatars and the Ukrainian community in Crimea has become systemic.  They threatened to even close Crimean Tatar schools, thought the Crimean Tatars managed to maintain their right to them.

There are three official languages in Crimea: Crimean Tatar ; Ukrainian and Russian.  Despite this, a law was adopted on May 20, 2015, relating Crimean Tatar to the status of a non-compulsory native language.  Parents were angered, considering it insulting that they have to ‘apply’ to have their children taught in their own native language.

As reported, the situation with instruction in any language but Russian since annexation has become critical.

A second school year under Russian occupation has just begun with not one class opening for children studying in Ukrainian, and only 24 opening in Crimean Tatar. 96% of students are now studying in Russian.  Even in traditionally Crimean Tatar schools, students study in either Crimean Tatar or Russian, with Russian predominating.

Parents report that they have been placed under pressure to not ‘apply’ for their children to study in their native language.   The occupation regime’s educational authorities then claim that the state of affairs is due to lack of parental demand.

As well as pressure, other factors are at play, including the lack of textbooks for children in Crimean Tatar.  There is also the fact that even school students studying in Crimean Tatar have to switch to Russian in the final two years of school.  These are the years when important exams are taken meaning that students who come from another language will likely be disadvantaged.   (More details and worrying statistics here: Ukrainian & Crimean Tatar pushed out of schools in Russian-occupied Crimea).