From a Zwastika to "No to the War". Anti-war activities in Russia, 9-18 SeptemberLook at this instead. Anti-war activities in Russia, 2-11 September 202213-year sentence against Belarusian investigative journalist who helped expose crimes against Ukraine Fascism is here in Russia. Anti-war activities in Russia, 15-22 AugustOpposing the Orwellian State. Anti-war activities in Russia, 27 July-5 AugustFeminists, “Railroad Partisans” and School-Leavers Protest. A Digest of Protests in Russia, 25 June-2 July 2022 Belarusian rail partisans who helped save Kyiv from the Russian invaders threatened with death sentences “We’re not celebrating today” – digest of Russian protests (early June 2022)Even in Russia, Putin’s ‘denazification’ claims prove no excuse for war against UkraineRussia is forcibly ‘mobilizing’ Ukrainians from occupied territory to fight its war against Ukraine Fake ‘referendums’ at gunpoint planned to try to ‘legitimize’ Russia's invasion of Ukraine Russia blocks OSCE conference when prevented from spreading disinformation about occupied Crimea and Donbas Neo-Nazi Russian nationalist exposes how Russia’s leaders sent them to Ukraine to kill Ukrainians«Blessed is he who visited this world in its fateful moments...»Russia blocks access to Ukrainian jailed for 6 years for social media post Abducted journalist’s life is in danger in Belarus. Not only his while Lukashenko and Putin get away with terrorismUkraine is illegally deporting activist to Belarus to face persecution Russian-occupied Crimea and Donbas close to North Korea in Freedom House rating Belarusian Journalists Handed 'Absurd' Prison Sentences For Live Coverage Of Anti-Government RallyFake ‘Ukrainian fascist’ arrested and charged with working for Russia and its proxy Luhansk ‘republic’
• Topics / News from the CIS countries 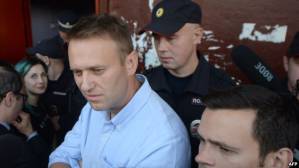 Thousands of Russian opposition activists and their supporters rallied in Moscow, in the wake of regional elections that saw the ruling party trouncing opposition candidates in voting criticized as rigged.

The protest, called A Meeting to Change Power, was the first in many months to publicly challenge President Vladimir Putin’s government, but it drew far fewer numbers than organizers had hoped for -- between 2000-4, 000, by several unofficial estimates.

Held in a southern district of the Russian capital, well outside the center, it featured many from the country’s beleaguered and fractious opposition, with attendees waving Russian flags and the flags of the coalition group called Parnas.

Many held signs referring to the opposition politician Boris Nemtsov, who was gunned down near the Kremlin in February. Other signs read “Putin is a Tsar; He is a Bureaucrat” and “Enough of the Lies and Stealing.”

“We will continue to tell people about corruption and thievery because this is our country. This is our civic obligation, ” Ilya Yashin, a longtime activist, told the crowd.

The Kremlin-backed United Russia political party, which dominates the country’s political system, won convincingly in the September 13 voting to choose governors and regional and municipal parliaments in more than two dozen regions.

Some opposition groups had hoped for a decent showing in the region of Kostroma, northeast of Moscow, but later complained that they were allowed to run there only so that United Russia could win a decisive victory there and discredit them.

Golos, an independent election watchdog, said in a report after the vote that the overall election demonstrated the lack of political competition and showed the government’s control over the results.

“The results of most campaigns were predetermined by the incumbents and electoral commissions at the stages of candidate registration and campaigning, ” the group said.

Attendees at the Moscow rally were met with a sizable police presence, including helmeted riot officers, metal detectors, and a helicopter that hovered over the crowd.

At one point, a multistory banner, which hung from one of the towering apartment blocks ringing the square, mocked the organizers and their slogan saying We Want to Change the Opposition.

Though the United Russia party has suffered in the past amid perceptions of corruption, President Vladimir Putin remains hugely popular with approval ratings well above 80 percent, according to some independent polls.

National parliamentary elections are scheduled for next year, while the next presidential vote will be held in 2018.

Putin, who is eligible to run for the six-year presidency again, has not yet said if he will be a candidate, though many experts predict he will.

With reporting from Reuters