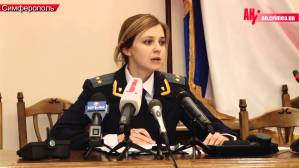 In the latest move in an ongoing offensive against the Mejlis or Crimean Tatar representative assembly, Natalya Poklonskaya, de facto prosecutor in Russian-occupied Crimea has effectively warned the media against mentioning the Mejlis.  A message was sent to all leading media from the ‘Ministry of Internal Policy on Information’, with the latter citing a letter from Poklonskaya.  This asserts, in insulting manner, that the Mejlis does not officially exist.

“The Prosecutor of Crimea, citing information from the Central Department of the Russian Federation Justice Ministry on Crimea and Sevastopol informs that on the territory of the republic non-commercial organizations are not registered with the name or part of the name ‘Mejlis’ or ‘Mejlis of the Crimean Tatar People’.

On the basis of this official letter, the said Ministry “strongly advises” the Crimean media “to stop using the name or parts of the name of non-existent organizations in news, articles, and interviews.”

It is true that the Mejlis has never been acknowledged full official status, but it is undoubtedly the Crimean Tatar self-governing body and enjoys widepread confidence.

The “strong advice” comes as Crimean Tatars under the leadership of Refat Chubarov, Head of the Mejlis, have initiated a blockade of the administrative border between mainland Ukraine and Crimea, allowing no trucks carrying goods to pass.  The pro-Kremlin media have been careful to avoid mentioning Crimean Tatars at all, and try to present the blockade as being run by Ukrainian ‘radicals’.

It is, however, also part of a major offensive launched soon after Russian invaded and annexed Crimea.  It began with the banning from their homeland of Crimean Tatar leader Mustafa Dzhemiliev and Refat Chubarov, and harassment and threats against other members of the Mejlis.

With repressive measures increasing by the day against Crimean Tatars, the Mejlis felt compelled to call on Crimean Tatars to boycott the largely pseudo elections organized by the occupation regime in September 2014.

Two days after the elections, on Sep 16, armed men appeared at the Mejlis building in the centre of Sevastopol and blocked access while the FSB spent 11 hours carrying out a search.  They were presumably hoping to find something ‘incriminating’.  In the absence of anything, bailiffs turned up the following day with a court writ giving the Mejlis and the Crimea Fund – the charity which owns the building – 24 hours to vacate the premises.  The pretext was feeble and in no way linked with the armed search the previous day.  Details here: Crimean Tatar Mejlis given 24 hours to leave.

Then on Jan 29 2015, the occupation regime arrested Akhtem Chiygoz, Deputy Head of the Mejlis and most senior Mejlis figure left in Crimea, following the bans of Chubarov and Dzhemiliev.  He was taken into custody on charges of ‘organizing and taking part in mass disturbances’, namely a demonstration 10 months earlier which had taken place the day before Russian soldiers seized control in Crimea, and 20 days before Russia formally – and illegally – annexed Crimea.  Russia and its puppet government in Crimea are not only in breach of fundamental principles of law in pursuing such a legally absurd case, but are even violating Russian legislation.  Almost 8 months later, Chiygoz remains in detention and there seems no plan to release him.  Other members of the Mejlis face constant harassment and summonses for questioning. Details:  Russia breaches own law to imprison Crimean Tatar leader

There have also been efforts to put malleable people, loyal to the Russian occupation regime, in top Mejlis posts.  They have failed, and this new extraordinary ‘advice’ to not mention the Mejlis suggests that Russia is seeking to destroy, or marginalize and silence the Mejlis altogether.