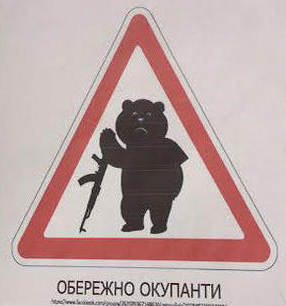 Russia is now using schoolkids to create the pretence of legitimacy for its illegal occupation of Crimea, and may have deceived the schools involved, claiming that the teenagers would be visiting St Petersburg.  Instead, they were taken to Crimea with their visit eagerly reported by such pro-Kremlin TV channels as Life News.

As reported, there have been angry demands that Poland’s Ministers of Foreign Affairs and Education investigate how Polish school students came to be on a Russian-sponsored trip to Crimea in clear breach of Ukrainian law and international sanctions.  The teenagers are due to leave Crimea on Thursday after a visit scheduled to include a meeting with the occupation government installed after Russian soldiers seized control on Feb 27, 2014.

Around 15 senior school students or recent school leavers from Białystok and the region (województwo Podlaskie) who won a competition on knowledge of Russian Literature received a trip to Russia as their prize.  It would have been extremely logical for them to be taken to St. Petersburg, the city closely associated, for example, with Alexander Pushkin and Fyodor Dostoevsky.  Instead they were flown from Moscow to Simferopol.

Nedim Useinov, representative of the World Congress of Crimean Tatars in Poland, calls the visit an international scandal.  He believes that the Russian-funded “Moscow Foundation of the ‘Russian-Polish Centre for Dialogue and Understanding’ may have deliberately misled the kids and their parents as to their destination. He points out that Russia is trying to create the impression that its annexation of Crimea is being quietly recognized and was very overtly pushing the idea that Crimea was Russian.

News of the planned trip was first published at the end of July this year, yet went ahead unimpeded.  Kommersant reported then that the trip was being organized by the Russian-Polish Centre, officially founded, through Presidential decree, by the Russian Ministry of Culture at the beginning of 2011,  Its director, Yury Bondarenko claimed that nobody was planning to feed the teenagers with propaganda, that they would, on the contrary, be given the opportunity to see life in Crimea “with their own eyes’.

Their eyes, from the outset, were going to be directed where to look, and who to talk to.  Back in July, Bondarenko explained that they had already agreed a meeting with Sergei Aksyonov, de facto leader of Russian-occupied Crimea.  The programme, he said, also included a visit to “a Crimean Tatar settlement”, and a meeting with the peninsula’s deputy prime minister, Ruslan Balbek, a Crimean Tatar by nationality”.

Balbek’s ethnic background has been disputed, but he is flaunted as one of the few Crimean Tatars who chose to cooperate with the occupation regime.  There is no suggestion that the students will have a chance to meet with people who do not support Russia’s internationally condemned annexation of Ukrainian Crimea.

There is no excuse for such selective vision.  International rights NGOs like Amnesty International and Human Rights Watch, as well as the EU and Council of Europe have all expressed concern over the serious rights violations in Crimea since Russia’s annexation, including the pressure that the Crimean Tatars, the indigenous people of Crimea, are facing.

Bondarenko continues to push his line.  Gazeta Prawna reported on Sept 21 that the visit, “organized by the Russian authorities”, was underway.  Bondarenko told them that he considers “Poland to be a democratic country in which people have the right to assess the situation themselves.”   Asked whether he understood that they were prompting Polish children to breach Ukrainian law by taking them to Crimea without agreeing this with Kyiv, his response was supremely cynical.  There will be no indication that they visited Crimea in their passport.

Back in July, the Słavomir Dębski, head of the Warsaw-based Centre for Polish-Russian Dialogue and Understanding which is financed by Poland called the planned trip ‘provocation’.

He said that Russia was a huge country and sending young people “to at very least disputed territory constitutes politicization of youth exchanges”. Anna Marek, spokesperson for the regional educational authority told Radio Svoboda that the Polish authorities had had nothing to do with organizing the visit.  However when the rumours began about he planned trip to Crimea, they wrote to all the schools involved warning them that the trip would be illegal, as well as to the society which runs the annual competition.  Marek asserts that they were told on Sept 11, that the other planned destination was St Petersburg.

Yet the trip happened, prompting a statement issued on Sept. 22 by over 30 representatives of Ukrainian, Crimean Tatar and Polish groups.  This expresses concern and anger over the trip, pointing out the clear breach of international law, as well as Ukraine’s Law on Temporarily Occupied Territory.  The latter stipulates that all visits to Crimea must be agreed with the Ukrainian authorities and via Ukraine.

“On behalf of the Ukrainian and Crimean Tatar community living in Poland, as well as all others who feel concern, we categorically condemn the organizers of this visit.  We call on Poland’s Ministries of Education and Foreign Affairs to investigate the circumstances between the participation of Polish youth in a trip to Crimea whose annexation has not been recognized by either Poland, or the European Union.”

This call would surely be endorsed by all Ukrainian rights organizations monitoring the grave situation in Russian-occupied Crimea.

The person accompanying the young people is Andrzej Romanchuk from the Russian cultural-educational society in Białystok.  He was one of the group of mostly far-right or neo-Stalinist, but unwaveringly, pro-Russian ‘observers’ of the pseudo-referendum on March 16, 2014, used as the excuse for Russia’s forced annexation of the peninsula.

The 15 young Poles should spare a thought for Crimean political prisoners,  like film director Oleg Sentsov and civic activist Oleksandr Kolchenko who were recently sentenced to 20 years and 10 years, respectively.  Their ‘crime’ was basically to have opposed Russia’s annexation of their native Crimea.  Civic activists and just young Crimean Tatar men, not so much older than those students, have disappeared and have likely been killed.  Crimean Tatars have been exiled from their homeland or imprisoned, and there are ongoing violations of the most fundamental rights.

One of the twin organizations linked with this shameful event receives state funding.  Whatever Bondarenko and his employers may think, Poland is a democracy based on rule of law.  It is this that Russia flouted by forcibly annexing Crimea, and is now breaching on a day to day basis in its repressive measures and curtailment of fundamental human rights and civil liberties in Crimea.