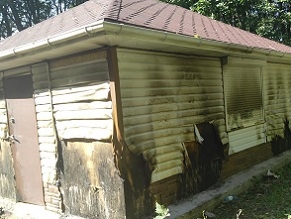 The Euro-Asian Congress has reported another arson attack, this time in the old Jewish cemetery in Kolomyia [Ivano-Frankivsk oblast].  The attack took place during the early hours of Sept 19, the first Sabbath of the new year according to the Jewish religious calendar, with vandals setting fire to the ohel (a small chapel-like structure for prayer) over the grave of a tzadik, or righteous person.  Police arrived at the scene before the fire brigade and managed to put out the fire.

This was not the first attack, with the wrought-iron gate from the cemetery railing having been cut up and taken away the previous night

The Jewish community has reported the attacks and is also offering a reward for information helping to find the culprits.