Ukraine must not help Russia hide its rights violations in CrimeaWhy is Ukraine restricting Crimeans’ rights?Transport blockade of Crimea a Gift to the Kremlin?Russian, or else: On how Russia is foisting its citizenship in CrimeaCrimean Tatars and others face citizenship dilemmaRussian methods: Calls for Crimea’s return to Ukraine could get you imprisonedMGIMO historian fired for article comparing Crimean annexation to Hitler’s AnschlussInformation channels at warDonetsk Front in Putin’s Dirty WarScurrilous rumours used to spread fear and distrust in Eastern oblastsAutoMaidan activist shot at near ChongarRussian troops already deployed in mainland UkraineThe Crimea is our Home: Get your troops out!Crimean "referendum" a grotesque farceCrimean Tatars call on all Crimeans to boycott "referendum"Avoiding Ukraine’s language minefieldsChief Rabbi and others dismiss Putin’s “anti-Semitic extremist” claimsRussian propaganda must be challengedWestern Media: Don’t distort the situation in Ukraine!Russia’s aggression poses dangers beyond Ukraine’s borders
• Topics / Freedom of movement 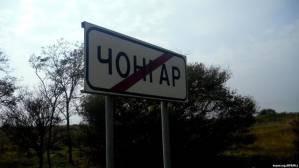 On Sept. 24, Ukraine’s Cabinet of Ministers adopted important amendments on entering and leaving areas under occupation with direct impact for foreign journalists and human rights activists, as well as members of international NGOs.

As reported here, Ukraine’s Cabinet of Ministers on June 4 introduced rules on entering and leaving Crimea that effectively closed access to Crimea for foreign human rights workers, Russian lawyers defending Ukrainian nationals in Crimean courts and foreign journalists.  The move was received with outrage by human rights organizations.  With Russia seriously infringing human rights in Crimea and restricting freedom of speech, it seemed like a bad joke that Ukraine was preventing people who could help those facing repression and to provide information about what is happening in Crimea.

At a press conference on Sept 24, human rights activists broadly welcomed the amendments though stressed that some of their recommendations had not been heeded.

They noted that the list of grounds for receiving permission to enter Crimea had now been significantly broadened.   It now includes, for example, people wishing to take part in events held by the Mejlis or representative assembly of the Crimean Tatar People and from religious orders seeking to teach their faith, carry out religious rites.  Such religious missions must be agreed with Ukraine’s Ministry of Culture.

Some problems have been partially addressed, but remain complicated in practice. As reported, the original rules were particularly problematical for children under 16 who were effectively forced to cross what should be the administrative border between Crimea and mainland Ukraine in accordance with the Rules for crossing the state border.  This is in breach of the Law on temporarily occupied Ukrainian territory according to which temporarily occupied territory remains an inalienable part of Ukraine.  Children needed to have travel documents or a passport, and permission of both parents, with the latter also needing to have a Ukrainian passport for travel abroad (as opposed to the internal ’passport’ which all Ukrainian nationals have).  Organizing such documents takes an enormous amount of time, and it’s virtually impossible to obtain them in Crimea itself.   Human rights groups pointed out that this was an obvious infringement of children’s rights, especially if one of the parents was in Crimea, the other in mainland Ukraine.

The amendments mean that children under 16 can now travel across the border in the company of one parent or others authorized by only one parent.   There will also be access to a notary at the checkpoint.

Other problem areas in the June resolution have not been changed.   Darya Sviridova, from the Ukrainian Helsinki Human Rights Union, mentions, for example, that foreign nationals are not able to agree or even simply submit an application for entering Crimea from outside Ukraine.  They have to go to Ukraine, submit their documents and then wait, with the time frame for response “elastic”.

The procedure still regulates the movement of Ukrainian nationals which the Cabinet of Ministers has no right to restrict.

The restrictions had meant that the Crimean Human Rights Field Mission, effectively the only human rights group closely monitoring the situation, was unable to visit Crimea.  As reported, Russia is currently inviting only those foreign nationals prepared to breach Ukrainian law by not entering Crimea via Ukraine and provide propaganda and lies about the situation there.  It is stifling the media, persecuting individuals who express opposition, and obstructing attempts to properly monitor the rights situation.  The most crucial initiative monitoring violations – the Crimean Human Rights Field Mission –has been placed on a ‘stop list’ of so-called ‘undesirable’ organizations.

The need for Ukraine to facilitate, not impede foreign media and human rights workers was obvious.