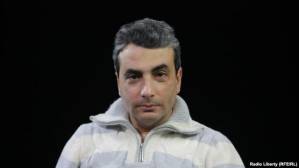 A lawmaker in Russia’s north-western Pskov region known for his relentless criticism of the Kremlin has been expelled from the local legislature, a move denounced by the opposition as politically motivated.

The Pskov regional assembly overwhelmingly voted to strip Lev Shlosberg, a member of the Yabloko opposition party, of his mandate.

Critics accuse him of unlawfully defending his NGO in court after authorities declared it a "foreign agent" under a controversial new law.

During the September 24 vote, lawmakers called Shlosberg a "mouthpiece of the [U.S.] State Department" and said he "betrayed" Crimean residents.

Shlosberg has strongly criticized Russia’s annexation of Ukraine’s Crimean Peninsula and its support for pro-Russian separatists in eastern Ukraine.

He was severely beaten up by unidentified assailants last year after publishing an investigative report into the death of two Pskov paratroopers suspected of having been killed while fighting Ukrainian government forces in eastern Ukraine.

Shlosberg denounces the vote as yet another attempt to silence him.

"My political relationships with the governor, with the United Russia party, and with its representatives at the regional parliament are extremely strained, " he tells RFE/RL (read full interview, in Russian). "Over the course of my four years in parliament, we’ve had violent political clashes several times a year. This is why these people, at the governor’s initiative, organized this bid to force me out."

Shlosberg says prosecutors called for the vote over his battle in court last year to scratch his nongovernmental organization, Vozrozhdenie (Revival), from the list of groups labelled as "foreign agents" under a controversial new law.

Prosecutors argue that Shlosberg’s status as a lawmaker barred him from defending the organization in court, an action they say justifies his exclusion from the legislature.

Shlosberg insists that his court appearance was lawful, as confirmed by a court of first instance, and dismisses the vote as politically motivated.

Despite Pskov lying far from Moscow’s corridors of power, Shlosberg’s bold and pointed criticism of the authorities has drawn nationwide attention.

The lawmaker has been a long-time detractor of Andrei Turchak, the Pskov region’s powerful governor and a member of the ruling United Russia party, whom he accuses of overseeing rampant corruption and abuse of office.

"I called him a coward, " he recalls. "Publicly, before the entire region, I told him that he got scared of competing against me in elections."

Turchak, in turn, has described Shlosberg and his Yabloko colleagues as part of a "fifth column" colluding with Western powers to undermine Russia’s interests.

He has poured scorn on Russia’s decision to ban the adoption of Russian children by U.S. citizens, condemned the annexation of Crimea, and accused the government of lying to Russians about its involvement in the conflict pitting pro-Russian separatists and Ukrainian forces against each other in eastern Ukraine.

To add weight to his claims, Shlosberg has conducted investigations into the actions of political leaders both in Pskov and Moscow through his newspaper, the independent Pskovskaya Gubernaya.

In August 2014, the newspaper published a report on the death of two Pskov paratroopers suspected to have been killed while fighting Ukrainian government forces in eastern Ukraine.

The report, which challenged Moscow’s denials that it is lending direct support to the separatists, caused a stir in Russia.

Several days later, Shlosberg was brutally assaulted by unidentified assailants. Investigators have yet to name any suspects in the attack.

Despite sustaining a severe concussion, head injuries, a broken nose, and numerous cuts and bruises, Shlosberg reiterated his allegations in interviews from his hospital bed.

"Politicians cannot be afraid, " he says. "If a politician shows fear, it severely demoralizes society. The situation in Russia is very grave and very dangerous but we cannot afford to be scared, otherwise we will lose everything."

But Shlosberg believes it was a damning report linking Turchak to the near-fatal beating of a prominent Moscow journalist that prompted the move to banish him from parliament.

Earlier this month, Pskovskaya Gubernaya became the first newspaper in the Pskov region to publish new evidence suggesting that the governor ordered the assault on Oleg Kashin.

Kashin had criticized Turchak in his blog two months before the beating, accusing him of using his father’s close ties to then-Prime Minister Vladimir Putin to clinch his appointment as Pskov governor in 2009.

The journalist had later dismissed Turchak’s demands for an apology.

"Maybe the fact that the newspaper broke the information blockade and wrote about all the new details of the investigation was the last drop, " Shlosberg says.

The chances for Shlosberg to retain his regional parliamentary seat appear slim. His detractors need to gather 23 out of 44 votes to secure his exclusion. United Russia, Turchak’s party, has 28 lawmakers in Pskov’s regional assembly.

But Shlosberg has no intention of going down without a fight. If expelled, he pledges to wage a legal battle to have the decision overturned.

"I will prove myself right in court, " he says. "That’s what civilized people do"