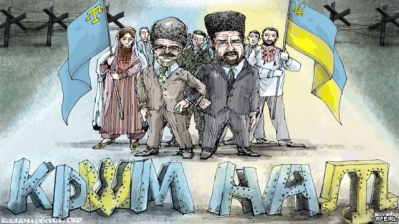 CRIMEA IS OURS - this catch cry behind Russia’s annexation of Crimea is restored its correct use  in this image by Oleksy Kustovsky.

The Mejlis, or Crimean Tatar representative assembly could face a ban, making it illegal in the Russian Federation and Russian-occupied Crimea.  The threat comes just days after the media in Crimea was informed that the Mejlis does not legally exist and “strongly advised” not to give it any coverage.  And after an attempt to have a prominent Crimean Tatar figure taken into custody on spurious charges.

Russia’s TASS news agency reported on Sept 24 that the Mejlis could be banned within the Russian Federation.  It quoted Ruslan Balbek, deputy prime minister of the de facto government as its source for highly distorted information.  The Mejlis is described as headed by Ukrainian MPs Refat Chubarov and Mustafa Dzhemiliev « who left the peninsula ».  Neither man left: 71-year-old Mustafa Dzhemiliev, veteran Crimean Tatar leader, former Soviet political prisoner, and twice nominee for the Nobel Peace Prize, was banned from his homeland within two months of Russia’s invasion, and Refat Chubarov, Head of the Mejlis – in early July. The  Deputy Head of the Mejlis, Akhtem Chiygoz has been in detention on legally absurd charges since January this year.  His detention is part of a long-standing offensive against the Mejlis, which has refused to buckle under and cooperate with the Russian occupation regime.

Both Dzhemiliev and Chubarov are among the Crimean Tatar initiators of the present blockade of Crimea which is preventing trucks carrying commercial loads from entering the peninsula.  They plan to continue the blockade until very specific rights-linked demands are met.  These include the release of Nadiya Savchenko, Oleg Sentsov and other Ukrainians whom Russia is holding illegally; an end to repressive measures against Crimean Tatars and to the stifling of Crimean Tatar and other Ukrainian media.  The blockade is backed by a number of Ukrainian organizations including the far-right-wing Right Sector which is now banned as ‘extremist’ in Russia.

Balbek claimed that “Dzhemiliev and Chubarov’s organization” is carrying out destructive activities against the people and called them “parasites who, using patriotic slogans, destroy their own country and pose a threat to others. If these figures continue to engage in extremist activities, and also hold join protests with organizations banned in the RF, they will achieve a ban on their activities”.

He asserted that these “professional Crimean Tatars » as he saw fit to call the two internationally respected Crimean Tatar leaders, and Right Sector are all financed « by western funds » and have one paymaster.

Revenge for the blockade or pretext?

The blockade, which began on Sept 20, is already having an impact, and there are suggestions that Crimea may limit its own export of produce to Russia to avoid an expected sharp increase in prices.

The blockade nearly had another impact as well on Tuesday Sept 22 during the latest court hearing in the dubious prosecution of Tair Smedlyaev, brother of a prominent figure in the Crimean Tatar Qurultay or National Congress.  Smedlyaev is charged over the peaceful protest on May 3, 2014 at the Armyansk crossing into Crimea after the ban against Mustafa Dzhemiliev was imposed.  Both the May 3 case, and the specific prosecution of Smedlyaev, are widely seen as attempts to intimidate Crimean Tatars.  Smedlyaev was held in custody for two months late last year, but then released on a signed undertaking.  On Tuesday, the prosecution suddenly tried to have him remanded in custody again, claiming that “Smedlyaev is continuing to promote the forming of a positive image of Dzhemiliev; Chubarov; Bariyev [Eskender Bariyev - coordinator of the Crimean Tatar Rights Committee] among the Crimean Tatar and pro-Ukrainian population, and their actions which show elements of extremism aimed at violating the integrity of the Russian Federation”.

Judges in both Russia and Russian-occupied Crimea are notoriously loath to disagree with the prosecutor, but but this nonsense was too much for Judge Larissa Likhacheva who rejected the application.

Members of the occupation regime have not coordinated their stories.  On Sept 22, it was learned that Natalya Poklonskaya, the de facto prosecutor had effectively warned the media against mentioning the Mejlis.  Not, however, because the Mejlis is ‘extremist’, but because it officially does not exist.   On the basis of her letter, Crimea media were “strongly advised … to stop using the name or parts of the name of non-existent organizations in news, articles, and interviews.”   It is true that the Mejlis has never been acknowledged full official status, but it is undoubtedly the Crimean Tatar self-governing body, recognized by the vast majority of Crimean Tatars.  Attempts to treat it like some kind of NGO, and still more to ban it, are insulting and confirm the worst fears about Russian occupation.

It seems possible also that Russia or its proxies in Crimea have seized on the opportunity to link the Mejlis with Right Sector which the Russian Investigative Committee and pro-Kremlin media have been demonizing since Euromaidan. Attempts to lump the two together and label both as ‘extremist’ organizations are impossible to take seriously given the offensive against the Mejlis that began shortly after annexation.  Constant ‘warnings’ about supposed ‘extremism’; arrests, armed searches and interrogations of Crimean Tatars have all become standard practice against the Mejlis which has continued to use such hurtful vocabulary as ‘invasion’ and ‘occupation’ and to insist that Crimea is Ukraine.

If the first measures were directed against Crimean Tatar leaders and prominent activists, a major offensive against the Mejlis itself began in September 2014.  On Sept 16, just two days after pseudo elections which the Mejlis had called on Crimean Tatars to boycott, armed men appeared at the Mejlis building in the centre of Sevastopol and blocked access while the FSB spent 11 hours carrying out a search.  Having failed to find anything ‘incriminating’, a new pretext for the offensive was presented the following day.  Bailiffs turned up with a court writ giving the Mejlis and the Crimea Fund – the charity which owns the building – 24 hours to vacate the premises (See: Crimean Tatar Mejlis given 24 hours to leave).

Then on Jan 29, 2015, Akhtem Chiygoz, the most senior figure in the Mejlis following the ban on Chubarov and Dzhemiliev, was arrested and has been held in custody ever since.  The charges are breathtakingly lawless since they pertain to a protest that took place prior to annexation over which Russia, even according to its own legislation, has no jurisdiction (see: Russia breaches own law to imprison Crimean Tatar leader).

After initial attempts to woo Mustafa Dzhemiliev and the Mejlis failed, the occupation regime has resorted to both repression and attempts to undermine the authority of the Mejlis and install malleable people, loyal to the Russian occupation regime, in top Mejlis posts.  It can try to use the involvement of Right Sector as a pretext, but the fact will remain that the Mejlis’ ‘extremism’ lies in their demands that fundamental rights are observed in Crimea, and their affirmation that they are in their – Ukrainian Crimean – homeland.