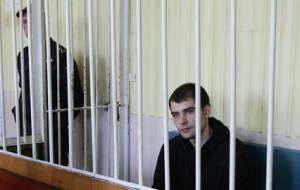 Natalya Poklonskaya, de facto prosecutor in Russian-occupied Crimea believes the 20- and 10-year sentences passed on political prisoners Oleg Sentsov and Oleksandr Kolchenko should have been “much tougher” and informs of three other cynically lawless trials about to begin.  Two pertain to alleged events over which Russia has no jurisdiction, while the third involves an unnamed member of the Ukrainian Azov Battalion who has allegedly ‘confessed’ to a suspicious number of disparate crimes.

In an interview to RIA Novosti, Poklonskaya was asked about Euromaidan activist Oleksandr Kostenko, sentenced in May to 4.2 years on surreal charges, and recognized by the authoritative Memorial Human Rights Centre as a political prisoner.  Poklonskaya, who personally demanded that sentence, begrudgingly acknowledges that the sentence was reduced by three months at appeal level.  She then claims that “his arguments and the shouts from his lawyer that he was ill-treated, not given food or drink, were not confirmed.  At present prisoner Kostenko feels OK and there are no complaints about the conditions.”.  Kostenko’s lawyer Dmitry Sotnikov is blunt in calling this outright lies.  The complaints are continuing, and the original allegations of torture have never been addressed, despite the fact that Kostenko received a broken arm and severe bruising, etc. while in detention.

The main charge against Ukrainian national Kostenko was of causing a minor injury to a Berkut riot police officer (from a Crimean unit, and at least at the time a  Ukrainian national) on Feb 18, 2014, in Kyiv not Crimea, and a full month before Russia annexed Crimea.    The supposed offence was unprovable and something over which a court in Russian-occupied Crimea could have no jurisdiction  (See: Euromaidan activist tortured with impunity in Russian-occupied Crimea ).

Poklonskaya previously asserted that close on 50 other such ‘cases’ were under investigation.  She now says that one is shortly to go before the court, with the charge this time much more serious – of attempted murder.

The person, who is not named, is described as a Russian who took part in Maidan.  He was arrested in Russia 6 weeks ago and taken to Crimea.

If Kostenko’s trial, and Poklonskaya’s threats to find room for all Ukrainian ‘radicals’ in remand prisons were a menacing threat to all Ukrainians in Crimea, the scope has now been broadened.  Russian nationals who took part in the mainly peaceful protests on Maidan can now also expect to face absurd and unprovable charges of trying to kill Crimean Berkut officers in Kyiv before annexation.

A person whom Russia is claiming to be a fighter from the Ukrainian Azov volunteer battalion was reported arrested in Crimea at the beginning of May this year.  Within a month, the person remained anonymous, his existence denied by the Azov command, but the list of his alleged offences wildly varied in scale and time.  He was accused of anti-Semitic vandalism on a synagogue within 24 hours of Russia’s seizure of control; of an attack on a mosque and attempted attack on the prosecutor’s office.   Poklonskay claimed in June that this Mr X was facing a life sentence.  The allegations coincided with others claiming erroneously that another opponent of Russian annexation was an Azov leader and aroused suspicion that this was the next target of a show trial.

Poklonskaya now claims that the case against the still unnamed man will shortly be passed to the court.  “He has admitted guilt and betrayed others. They’ll all daring when they’re in masks and when they drink tea with psychotropic substances. When the tea runs out, their daring disintegrates.”.

As reported, it seems likely that a 20-year-old was arrested, held incommunicado and under the total control of ‘investigators’ trained in extracting ‘confessions’.  Poklonskaya’s allegations were viewed with scepticism by Vyacheslav Likhachev, researcher and long-time monitor of xenophobia and anti-Semitism, who noted  that the man would seem to have first desecrated the synagogue, set fire to the mosque and attempted a terrorist attack before, at the earliest in August last year, joining up with Azov and fighting, in order to then arrive back in Spring to await arrest.   With one show trial of alleged ‘Ukrainian nationalists’ now underway in Grozny, Chechnya,   it is not unlikely that a young man in Crimea has been tortured into ‘confessing’ to being an Azov fighter guilty of various anti-Semitic and anti-Muslim offences  (see: ‘Azov Battalion’ Show Trial brewing in Russian-occupied Crimea).