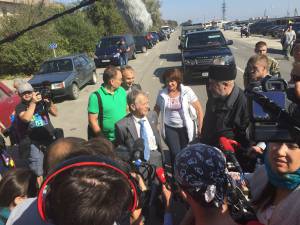 Mustafa Dzhemiliev and Refat Chubarov on the first day of the Blockade (Sept. 20) Photo: Ayder  Muzhdabayev

One Crimean Tatar leader is currently imprisoned in Russian-occupied Crimea, but his fate could be shared by all others, as well as any Ukrainian national opposing Russia’s annexation, according to the argument put by Natalya Poklonskaya, the occupation regime’s de facto prosecutor.

Akhtem Chiygoz, Deputy Head of the Mejlis or Crimean Tatar representative Assembly has been in detention since the end of January 2015 and Poklonskaya now states that ‘the case’ is likely to reach the court by the beginning of October.  This so-called prosecutor of Russian-occupied Crimea scarcely tries to give the prosecution a legal coating.

“Chiygoz is charged with committing a generally criminal crime [sic]. He dragged the people with him to a demonstration, a lot of people were injured, two died, and now he must answer for his actions.”

The demonstration in question took place on Feb 26, 2014, before Russia’s annexation and therefore under Ukrainian law.  Even were the bizarre charges to be justified, and all the evidence suggests that they are not,   Russia has no jurisdiction and is therefore even in breach of its own legislation.  It is also openly persecuting Crimean Tatars since only they, not any pro-Russian participants in the events of Feb 26, have been targeted (see: Russia breaches own law to imprison Crimean Tatar leader).

Poklonskaya’s invective against Crimean Tatar leaders Mustafa Dzhemiliev and the Head of the Mejlis, or Crimean Tatar representative Assembly Refat Chubarov is doubtless due to the current blockade of all trucks carrying goods to Crimea from Ukraine.  Poklonskaya and Russian pro-Kremlin media are all actively trying to distort the picture by focusing on so-called “radicals from Right Sector” and claiming that the blockade has had no impact.

What is particularly curious from a top official of an occupation regime condemned by the UN and all democratic countries as in breach of international law is Poklonskaya’s assertion that “the so-called blockade does not comply with any international norms.”

Parroting the narrative from Moscow, she asserts that the initiators of the blockade are just trying to justify their existence and “are acting in the interests of western countries, are puppets in somebody’s hands, trying to get even with Crimea and harm Russia”.

Asked whether Russia’s bans against Dzhemiliev and Chubarov from entering their homeland are likely to be lifted, she rightly stated that it is not for her to decide.  She does, however, say that since both are facing ‘criminal charges’, they may “not want to”.

Chubarov, a Ukrainian national who was living in his native Crimea under Russia’s invasion and annexation, is charged with “calls to change Russia’s territorial integrity”.  Poklonskaya announced on May 29 that Russia’s FSB [Security Service] has initiated criminal proceedings against Chubarov under Article 280.1 of the Russian Criminal Code – the new article of the Criminal Code, in force since May 2014 and, as feared, being used against those who oppose Russia’s land-grab. Mustafa Dzhemiliev, who was 6 months old during Stalin’s Deportation and 71, when Russia banned him from his homeland, is charged with “illegally crossing the state border” which Russia has imposed between mainland Ukraine and Russian-occupied Crimea (presumably on May 3, 2014).

Chubarov’s response to the announced ‘prosecution’ was spot on: Germany’s Chancellor Angela Merkel – and effectively all other western leaders – could face the same charges.  Western leaders will be left alone, we assume.  Poklonskaya’s statement that both of these absurd ‘criminal prosecutions’ could result in the leaders’ arrest and detention is, however, a menacing threat to most Crimean Tatars and other opponents of Russian occupation.  It is a threat that, tragically, such individuals as Poklonskaya have been given the power to carry out.