Why are the Kremlin’s Proxies in Donbas provoking a Humanitarian Catastrophe? 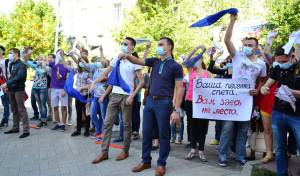 It remains unclear why the so-called ‘Luhansk people’s republic’ [‘LNR’] have ordered all but one western aid organization to leave the Luhansk oblast, or why one of the militant leaders has yet again announced plans for “integration with Russia”.  The militants’ current anti-Western line and their decision to drive international organizations out of militant-controlled areas will certainly reduce interference in the pseudo-elections that both so-called ‘people’s republics’ have announced.  Such behaviour must, however, make it even less likely that western countries would accept ‘elections’ which are so flagrantly in breach of the Minsk Accord.

UN officials reported on Sept 24 that the LNR ‘de facto authorities’ had ordered all UN agencies in Luhansk to get out by the following day.  This followed the rejection of applications from all UN agencies and international NGOs, except the Red Cross,  to work in the area.  The Red Cross was untouched by the bans, yet its humanitarian convoy was forced to return on Sept 25 without being allowed to enter militant-controlled areas.

Stephen O’Brien, the Under-Secretary-General for the Coordination of Humanitarian Affairs and UN Emergency Relief Coordinator, called the failure to allow humanitarian access “a blatant violation of international humanitarian law”, which will have “a serious impact on some 3 million people as winter approaches”.  People in the militant-controlled area will be deprived of food, shelter and non-food supplies, including vital medication.

O’Brien called on “everyone with influence over the de facto authorities” to ensure resumption of the aid.  Moscow is widely understood to be where those “with influence” are to be found,  but they have made no comment.

Ukrainian billionnaire Renat Akhmetov’s humanitarian aid is also not affected by the ban.  Jock Mendoza-Wilson from Akhmetov’s Foundation is reported to have suggested that the militants are hoping to receive humanitarian aid from Western countries via Russia.  His idea is that the aid would be presented as though from Russia.  It seems difficult to believe that western agencies would agree to this, especially given that they would be in breach of Ukraine’s law on temporarily occupied territory if they entered such territory from Russia, without Ukraine’s permission.

Akhmetov is widely considered to be hedging his bets and has never come out as strongly as other oligarchs in opposition to the events in Donbas. His Foundation’s presence in militant-controlled areas has generally been non-problematical, unlike that of international bodies.

One of the NGOs banned is Médecins Sans Frontières (MSF).  The organization stressed that they provide critical medical and humanitarian assistance in Luhansk and that the ban will deprive vulnerable people of essential healthcare and medicines.  ‘LNR’ leaders have, however, targeted this renowned NGO for a particular smear campaign, claiming that it has used medication beyond its sell-by date, etc.

A very obviously orchestrated protest by young people to “see MSF out” of the area was highly reminiscent of the staged protests in early July against the OSCE Monitoring Mission.  Those earlier protests coincided with a serious arson attack against the Mission and other disturbing incidents. There was concern then that the militants were seeking to drive out the Monitoring Mission, and the same fears seem warranted now.  Nobody has presented any proof for allegations against MSF, and the accusations seem especially dubious given that almost all NGOs have been thrown out, not just MSF.

‘Foreign’, it would seem, is being overtly labelled as ‘counter-revolutionary’.  According to News of Donbas, ‘LNR’ has reported a “new strategy on external security and countering external and internal threats”.  The militants claim that the ban on international organizations was due “to the threat of counter-revolution from them within the ‘republic’.”

The less independent organizations, the better if you have something to hide.  The de facto leaders of the so-called ‘Donetsk and Luhansk people’s republics’ are insisting on holding ‘elections’ in October and early November in direct breach of the Minsk Accords.  There is no way that they can comply with the agreement reached in Minsk since this requires free and fair elections held in accordance with Ukrainian legislation.  As well as the fact that these pseudo-elections have not been agreed with Ukraine,  they will also be held without free media, without real opposition and almost certainly with armed gunmen in close proximity to so-called polling stations.

Over recent weeks, in the run-up to Russian President Vladimir Putin’s trip to the UN, there have been all kinds of conciliatory noises from the militants and from Russian Foreign Minster Sergei Lavrov.  The militants, we are told, are now willing to accept integration into Ukraine. and there was even a rather theatrical ‘coup’ on Sept. 4 in which pragmatist Denis Pushilin is supposed to have ousted ideologue Andrei Purgin.

Pushilin and his cronies have yet again changed their tune.  Interfax.ru reports that Pushilin stated on Friday, Sept 25, that “It is clear that Ukraine will do everything it can to push us away, and we must be ready to integrate into the Russian Federation.”  His comments came after a forum in Luhansk which discussed integration with Russia, and were accompanied by comments about the ‘elections’ they are planning.  He claims that these will be attended by “several international observers”.  It seems likely that he meant the same far-right or neo-Stalinist politicians who have proven so helpful in ‘observing and approving’ the previous ‘elections’ one year ago; the pseudo-referendum in Crimea and plenty of others.

Well-known Ukrainian journalist Denis Kazansky called Pushilin totally without principles and willing to do whatever he’s told.  Why the above-described developments have taken place now remains to be seen, but it is most unlikely that Pushilin and his cronies were acting without prompts from Moscow.