HRW: A Tribute to Ludmila Mikhailovna AlexeevaLyudmila Alexeyeva is 85Veteran Russian Rights Activist Believes She Was Targeted For AttackLudmila Alexeeva: There will be victims again in Russia. After all human rights defenders are considered traitors and enemies of the present systemOn duty while humanity endures
• Topics / Human rights protection 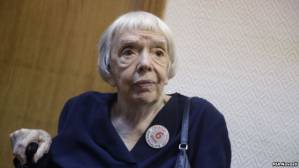 A Soviet-era dissident and one of Russia’s most outspoken and respected rights advocates, 88-year-old Alekseyeva received the prestigious award on September 28 during the PACE session in Strasbourg, France.

PACE President Anne Brasseur,  who chaired the selection panel, said Alexeyeev had "inspired many generations of activists in Russia, but also abroad, to commit themselves to the struggle for justice.

In an emotional speech to the assembly, Alekseyeva said receiving the prize was a "recognition of all Russian human rights defenders who work in very hard circumstances."

She condemned the deepening crackdown on civil society in Russia and said the restrictive "foreign agents law" adopted in 2012 aimed at "destroying" nongovernmental organizations.

Alekseyeva joined the Soviet dissident movement in the 1960s before going on to become a founding member of the Moscow Helsinki Group.

Forced to emigrate from Russia to the United States in 1977, she returned to her homeland in 1989 to continue her work.

In her speech to PACE, Alekseyeva said she did not foresee any improvement for Russian civil society in the near future, but she said she remained "optimistic about the long-term prospects."

"One day we will definitely become a democratic country, because we are a European country, " she said. "I believe in this with all my heart."

The 60, 000 euro ($66, 000) annual prize honors individuals or organizations judged to have undertaken "outstanding civil society action in defense of human rights in Europe and beyond."

Now in its third year, it is awarded by PACE in partnership with the Vaclav Havel Library in Prague and the Czech Charter 77 Foundation.