Babyn Yar and Remembrance beyond the Anniversary 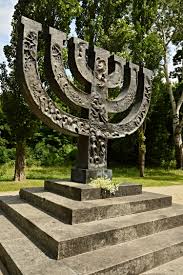 74 years ago Nazi Einsatzgruppen murdered almost 34 thousand Ukrainian Jews at a ravine on the outskirts of Kyiv, known to the world as Babyn Yar .

Many of the Jews who came, as ordered, to Babyn Yar on Sept 29 and 30, 1941 hoped that nothing bad could await them on the eve of the holiest day of the year Yom Kippur which fell that year on Oct 1.  The Nazis had pasted up notices all over Kyiv on Sept 18, ordering all Jews to appear the next morning with their possessions and documents near the Jewish Cemetery, not far from Babyn Yar. Those who did not comply, the notice said, would face summary execution.

Some tried to escape, with around 150 give refuge by non-Jewish friends or neighbours.  Most went, probably hoping that since there was a railway nearby, they were being deported.

During the Nazi occupation, others were also executed at Babyn Yar: Roma, Ukrainian nationalists, including the poet Olena Teliha, Soviet prisoners of war and others.  The figure of 100 thousand is normally given, though it is not clear how accurate this is.

The Soviet regime avoided all mention of the massacre of Jews at Babyn Yar, as it largely did the Holocaust on Soviet territory.  Plans to build a rubbish dump at the ravine were condemned by the writer and War veteran Viktor Nekrasov who in 1959 spoke out, calling for a monument to those murdered at Babyn Yar.  The authorities ignored such calls, with even pulp being pumped into the ravine.  This led in 1961 to a catastrophic mudslide which claimed the lives of about 2 thousand people.

During the 1960s and 1970s the Soviets continued building over the ravine area.  A television centre and sports complex were built on Melnykova St, and by 1980 the territory had mainly been turned into a park, with only a small part of Babi Yar remaining.

After unauthorized meetings on 29 September 1966, the 25th anniversary of the Massacre and the following year, the authorities finally acknowledged the need for some kind of monument.  Dishonest to the end, the 1968 monument was to the memory of “Soviet citizens during the period of the temporary German-Fascist occupation of 1941-1943”.

It was only in 1991, following Ukraine’s independence, that a Menorah was erected at Babyn Yar.

A remembrance procession is held each year on Yom Kippur which fell this year on Sept 22.  Among the 200 or so participants were some who had themselves survived, as very young children.

Over the past two decades there has been debate and some controversy over plans for a proper memorial at Babyn Yar.  Objections are sometimes heard that “it wasn’t just Jews” killed at Babyn Yar.

True, but the worst massacre in Europe was carried out in Kyiv’s Babi Yar at the end of September 1941, with the victims all murdered because they were Jewish.

The attacks on the Menorah at Babyn Yar, and there have been a worrying six such acts of vandalism since the beginning of 2015, all appear to be the work of anti-Semites.

Flowers will be laid at the monument on Tuesday, Sept 29 in memory of Jewish men, women and children murdered in 1941. .  In honour of those same victims, it is surely time, as Jewish leaders have demanded, that the authorities take proper measures – whether a regular police patrol or CCTV cameras -  to safeguard this poignant memorial from desecration.