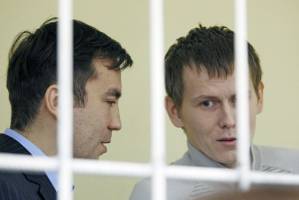 Yerofeyev on the left, photo: AFP

A court in Kyiv held the preliminary hearing in the trial of two Russian military intelligence officers captured on May 16 near Shchastya in the Luhansk oblast.  Aleksandr Aleksandrov and Yevgeny Yerofeyev were both remanded in custody for a further two months, and the case was sent to the Court of Appeal to decide whether it could be transferred to a court in the Luhansk oblast, as Yerofeyev’s lawyer Oksana Sokolovskaya demanded.  A date for hearings into the charges against the men was not set.

The men are charged with engaged in a war of aggression according to prior agreement of a group of individuals, this carrying a sentence of between 10 and 15 years; smuggling arms and ammunition by a group (from 5 to 12 years); infringing the rules for entering temporarily occupied territory (from 3 to 5 years); unlawful use of weapons (up to 3 years); helping a terrorist organization (from 8 to 15 years); a terrorist act causing death (from 10 years to life).  Sokolovskaya says that the prosecutor is demanding life sentences.

Both men have asked for the charges to be changed: Yerofeyev to spying; Aleksandrov – to unlawfully crossing the state border for reconnaissance work.

There has been talk of the men being part of an exchange and it is probably no accident that the preliminary hearing coincided with the resumption of the universally condemned trial of Nadiya Savchenko.

Most western media who reported the capture or Tuesday’s preliminary hearing speak of ‘alleged’ Russian officers, or use inverted commas.

Certainly Russia has claimed that the two men had not worked for the military for five months when captured.

The problem – for Russia – is that the two men denied from the outset that they had left military service and both identified themselves as current intelligence officers.

They were visited in hospital in June 2015 by Sergei  Krivenko from the Russian Human Rights Council.  His report explains that he had the opportunity to visit them on June 1 in the Central Defence Ministry Hospital in Kyiv.  Both were receiving treatment for their injuries and Alexandrov had undergone a unique operation which enabled the doctors to save his leg.

In June Krivenko noted that the conditions the men were held in were good and that both men categorically denied any form of torture or physical pressure on them since their arrest, as claimed by Russian television.  Neither seemed depressed, and they “held themselves with dignity”.

Their main concern was that they were being prevented from contacting their families.  The latter appeared to be under major pressure as part of Russia’s denial of the men’s role, as confirmed to any number of media sources.

At the end of May, Pavel Kanygin from Russia’s Novaya Gazeta visited the two men for the second time.  He had already spoken with both men who told him in detail about the reconnaissance work they were engaged in as Russian servicemen.  Kanygin writes that he had not planned to take any photos, but the men asked him to, explaining that it was only through such visits that they could make any contact with their families.  They tried phoning in his presence and found yet again that either nobody answered, or they were told that the number was “not available”.  That in fact determined the poignant title of Kanygin’s report: “It’s never happened to me that I rang my mother and she didn’t take the call”.   These were Alexandrov’s words who added that even before he married his wife, he could ring her even at 2 a.m. and she’d always answer.    Now there was silence (more details here).