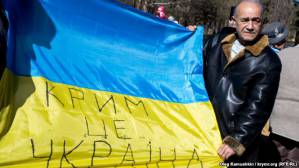 Kurtseit Abdullayev was sentenced to 20 hours community work for holding the Ukrainian flag with the words “Crimea is Ukraine” at a peaceful gathering on March 9, the anniversary of Taras Shevchenko’s birth.

Oleg Shevkun has lost his post as Chief Editor of the Russian Blind Society’s Internet radio service after honestly criticizing Russia’s forced annexation of Crimea.  He told Radio Svoboda that the management of his and any other Russian media which depend on state subsidies follow what their journalists are saying very closely and that self-censorship over the last year has intensified.

The Blind Society’s journalists recently went to a festival entitled Crimean Autumn in Yevpatoria [Crimea], an event for people for the visually impaired.  Shevkun announced the planned trip in advance and received a letter from a listener in Ukraine who asked whether they were going to Crimea because the management ordered them to, or “at the call of the heart”.  The person asked how this trip could be reconciled with their other programmes, and said that the radio station was not generally one of your ‘Hurrah, Crimea is ours pseudo-patriotic media’.

Both presenters of the programme – Shevkun and Natalya Leskina – offered their opinion.  Leskina answered that she was being sent by the station, but that a trip to Crimea was a pleasure.  She didn’t feel any “rabid fanaticism” on the subject, what had happened had happened, and she hadn’t been touched personally.

Shevkun said that when the little green men had turned up in Crimea, he’d been shocked, after all “Russian soldiers had crossed the border into another country”.  The second shock, he said, was that “Crimeans supported these actions”.

“I believe that from the point of view of international law the joining of Crimea was unlawful.  Those countries which reacted with sanctions were in the right. We got Crimea together with isolation from the whole world”, Shevkun said on the programme.

He said that he would be going to Crimea because there are a lot of blind people there and his radio station has something to offer them.

The trouble began during the Crimean Autumn festival with the management of the Blind Society criticizing and claiming that they don’t control the content of the programme.

Shevkun says he was asked to resign since the position expressed by the Chief Editor should reflect the official position.

He understands the management’s stand in that they could lose their public funding because of his position, and says that any journalist working for the Russian media knows that pressure is inevitable.   He began working for the station in 2013, and says that then there wasn’t such pressure.  “We have changed a lot since Feb-March  2014.”

Shevkun’s comments about the change since Russia’s aggression began in February 2014 have been echoed by other journalists.  As reported here, Colta.ru recently published interviews with former employees of mainstream Russian channels.  One of them had been told in February last year that the 970s-80s were child’s play to the cold war now beginning.  The head of the All-Russia State Television and Radio Broadcasting Company (VGTRK) had told them that if they didn’t want to take part, they should find another job away from information channels.  Most stayed, and poured out propaganda about a ‘fascist junta’ in Ukraine committing ‘genocide’ in Donbas, etc., including many who themselves had been on the protests about Vladimir Putin’s re-election in 2012  (See: Blood on their Hands: Servicing Russia’s TV Propaganda Machine)

Shevkun is not the first Russian to have lost his job, or faced even more serious consequences from open opposition to Russia’s annexation of Crimea.

In July a Russian court convicted poet and teacher Alexander Byvshev of ‘inciting enmity’ and sentenced him to 300 hours of community service, confiscated his computer and prohibited him from working as a school teacher for two years.  His ‘crime’  – the poem ‘To Ukrainian Patriots’ in which he expresses his opposition to Russia’s annexation of Crimea and suggests Ukrainians should ensure that not one inch of Crimea is handed “to Putin’s chekists” (see: Russian poet sentenced over poem in support of Ukraine)

Yury Ilchenko is currently in detention in Crimea, almost certainly over criticism of annexation.  The entire ‘case’ which has resulted in filmmaker Oleg Sentsov being sentenced to 20 years and civic activist Oleksandr Kolchenko to 10 years focused on four opponents of Russia’s invasion and occupation of Crimea.