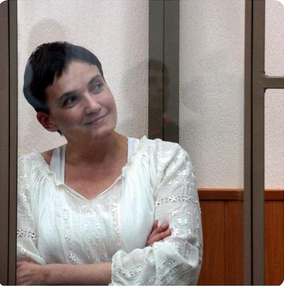 Russia’s Justice Ministry has stated that Savchenko’s ‘extradition’ can be discussed if Ukraine recognizes the verdict passed by a Russian court and guarantees that she would serve her sentence in Ukraine.   Pavlo Petrenko, Ukraine’s Justice Minister was blunt in his comments, saying that Russia’s Justice Ministry had yet again confirmed the rubber stamp nature of the judicial system and courts in Russia.  Such a statement before a verdict has been handed down “demonstrates one thing alone, that the verdict has already been written, and that it will definitely be a conviction.”

It would be difficult for anybody to believe in an acquittal in this case.  After all, if Savchenko is found innocent of ‘illegally crossing the border’, then Russia must explain why, after being captured by Kremlin-backed militants in Ukraine,   she was taken across the border into the Voronezh oblast, held prisoner by armed guards in the Euro Hotel, and visited every day by Investigative Committee ‘investigator’ Dmitry Manyshin.   Russia would have to find good reason for having effectively imprisoned for 18 months a Ukrainian MP and delegate to the Parliamentary Assembly of the Council of Europe [PACE].  And this when she has an unbreakable alibi and where there is no evidence backing the Investigative Committee’s claims.

Mark Feygin tweeted that the Russian ministry’s statement indicated one important thing, namely that the defence had totally proven Savchenko’s innocence, and for that reason, they were in a flap.

Feygin is surely over-optimistic on that score.  Just over a month ago, another Russian court sentenced Ukrainian filmmaker Oleg Sentsov to 20 years imprisonment and civic activist Oleksandr Kolchenko to 10 years.   In that case there was demonstrably nothing against Sentsov at all, and the one minor charge against Kolchenko did not constitute terrorism.  This and much more was demonstrated by the defence, and then Gennady Afanasyev, one of the two men on whose testimony the prosecution had built the entire ‘case’, retracted his testimony saying that it had been tortured out of him.   The prosecutor Igor Tkachenko still demanded the huge sentences, which the three judges: Sergei Mikhailyuk,  Viacheslav Korsakov and Edward Korobenko duly provided.

Feygin points out an important detail.  Savchenko’s abduction and already 18-month long detention make it imperative that all aspects of her treatment are considered by the European Court of Human Rights.  An application might be impeded if there has been an official ‘recognition’ of the sentence.  Feygin nonetheless recommends agreeing and immediately releasing her, jeering and poking their finger at Russia.

Russian President Vladimir Putin’s press secretary Dmitry Peskov repeated the normal Kremlin line about how they “could not predict” how the trial would go and how they “can’t interfere in this court trial”.

On this, as well as on so many issues, the Kremlin has lost all credibility.  There have been repeated calls from all western governments, PACE, the EU and OSCE to release Nadiya Savchenko and all Ukrainians illegally held, in compliance with the Minsk Accords.

The court hearings continued on Sept 30 and Oct 1 in Russian Donetsk, with the so-called witnesses for the prosecution giving testimony by video from St Petersburg and the Voronezh oblast.

The defence pointed to a number of places where the same alleged witnesses for the prosecution had written testimony which appeared to have been copied word for word from one witness to another.  According to defence lawyer Ilya Novikov, there is around 70% of such overlap between the five witness statements.  It is not only the formulations that are repeated, but even spelling and punctuation mistakes.

There were also important discrepancies between the written testimony and what people said on the video, and significant gaps in witnesses’ ability to recall quite basic things.

On Thursday two men whom Savchenko asserts were among her abductors gave testimony as witnesses for the prosecution.

Sergei Bobro claimed that on June 23 he and a friend had gone “for a drive” from his home in the Voronezh oblast and on the way back picked up Savchenko who wanted to be taken to the nearest place with a train or bus station.   They were supposedly stopped by the traffic police to check their documents, where it transpired that Savchenko didn’t have any documents with her.

The defence asked Bobro if he had any connection with the security or law enforcement services which the judge asserted did not pertain to the case.  Bobro in fact denied any connection.  Since Savchenko asserts that she was transferred to a car in the Voronezh oblast with two men called Sergei, one of whom knew a little Ukrainian, and believes it was these men, their connections would seem highly relevant.  Sergei Rudenko, who supposedly went for this drive with his friend gave identical testimony regarding how they were stopped.

Neither could remember basic details like what they were wearing.

Tertyshnikov, the traffic police officer also gave divergent testimony.  In the written statement he claimed several FSB officers turned up, in court he said just one.  He was also unable to say what the men were wearing.

One of the Ukrainians whose status as witnesses has been disputed by the defence but allowed by the court – Gennady Talalayev – was fleeing the shelling on the day in question.  He recalled seeing “20-25 rebels”, an inconvenient truth given that the prosecution is claiming that Savchenko directed fire “at civilians with no sign of being participants in armed conflict”.

As at previous hearings, it was hard to view the presiding judge Leonid Stepanenko as interested in an impartial consideration of the charges.  One of the applications rejected was for new investigative experiments since the material claims that Savchenko was able to discern (from over 2 kilometres) through binoculars whether a person was wearing military gear or not.  On the photographic material attached to the protocol of this experiment, you can only see dark silhouettes and cannot tell whether a person is holding a machine gun or a video recorder.

Nadiya Savchenko is facing up to 25 years on charges of directing artillery fire at civilians making this experiment of critical importance.

If the proceedings had anything to do with a trial, that is.