Another attack on journalists investigating Interior Ministry corruptionHead of Traffic Police Dismissed after Scandalous Lifestyle ExposedIt’s Tax Time In Ukraine, And Financial Discrepancies Suggest Corruption EnduresBehind the declarations: how public officials lived – and live nowParliamentarians’ secrecy regarding income given judicial OKVerkhovna Rada and Constitutional Court least willing to divulge public informationCourt rejects Verkhovna Rada claim that staffing details are not for the publicOPORA takes secretive Verkhovna Rada Office to courtCHESNO: Office of the Verkhovna Rada flagrantly violating Public Information ActUkrainska Pravda takes parliament to court over concealed informationResidences of Azarov, Lytvyn and Yushchenko to cost the taxpayer 50 million UAHCourt has no problem with parliament not handing over MP’s declarationsVerkhovna Rada Office refuses to hand over Deputies’ declarationsPublic Information Law like a Bolt from the Blue for the AuthoritiesCVU: Ukrainian authorities not ready to be openFirst legal proceedings over alleged infringement of Public Information LawStop Censorship will force Deputies to make their income declarations publicThe Public are most interested in how public funding is spentLaw on Access to Public Information: comes into effectMayor of Uzhhorod bans action in support of Public Information Law
• Topics / Law enforcement agencies 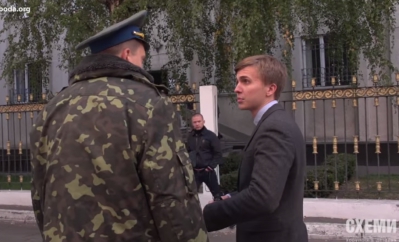 From the video footage which becomes blurred as the men are accosted.  The SBU employee speaking to Tkach is present throughout and does not take any actionTwo investigative journalists from the anti-corruption programme Skhemy: Corruption in Detail were accosted on Friday morning, Oct 2 outside Ukraine’s SBU or Security Service and told to confess to being spies.  The incident has since resulted in an apology from the head of the Kyiv SBU and promises of a swift inquiry, which media lawyers have heard before, and view with scepticism.

The journalists from the joint Radio Svoboda and UTV-1 Skhemy programme are preparing a report on how SBU officers travel around in luxury cars which do not correspond to their official income.  According to the journalists, they had already been filming near the SBU premises for several days.  On this occasion they had just shown a press service employee their press ID when several individuals turned up and, without either identifying themselves or explaining their actions, began dragging the two men to SBU officers nearby.  Tkach wrote on Facebook that their video camera was damaged and they themselves treated roughly and “told to admit to spying”.  Lazarevych later reported that he had seen two men, one in uniform, “attacking” Tkach, and tried to film this, while somebody else took hold of him, and attempted to wrench his video camera away.  They were dragged into a room, called spies and told to admit whom they were working for.

Tkach reports that they took Lazarevych’s wallet away after turning it inside out. The journalists demanded in vain that the men identify themselves and that they be allowed to phone their lawyers.

What they are to investigate, however, is now in question since the video from the SBU CCTV footage given to Radio Svoboda does not have the relevant moments on it, though it does contain footage immediately prior to the incident and when the men were released.

Ludmila Pankratova, lawyer for the Regional Press Development Institute, told Radio Svoboda that the behaviour of the SBU employees clearly falls under Article 171 of the Criminal Code, i.e. obstructing a journalist carrying out his or her professional duties. She does not, however, hold out much hope of charges being laid, saying that cases involving high-ranking officials or their guards are most often left to fizzle out, and seldom reach the courts.  The statistics are telling: of 224 cases in the first 8 months of this year involving infringements of journalists’ rights, only six were investigated by the Prosecutor General’s Office and passed to the court.

This is not the first case where Skhemy journalists have come under attack while carrying out their work.

On May 22 this year a film crew was attacked in Kominternivske, near Odesa.  Journalist Maria Tymoshchuk and cameraman Maxim Lenko had gone to the office of Lemodo, a firm which recently won an Interior Ministry tender to provide vehicle number plates worth 70 million UAH.  The company is registered in the Odesa oblast, and up till this successful tender had never been engaged in such activities.  The ‘office’ proved to be more than modest and closed.  It was while they were trying to photograph the sign on the door that somebody ran up and smashed their video camera.

That attack came soon after Skhemy revealed details about the sumptuous lifestyle of Oleksandr Yershov, Acting Head of the Traffic Police.  The public saw photos and the price tags of all the cars the members of Yershov’s family were driving, and the endless business class holidays his daughters had been on in the last 6 months.   The programme also highlighted obvious fiddles with the expensive cars and motorbike in fact driven bearing Interior Ministry number plates registered as being entirely different car models.

The scandal resulted in Yershov losing his post, one to which he had only recently been appointed by Interior Minister Arsen Avakov at the beginning of April.

This time the cars under scrutiny were driven by SBU employees.