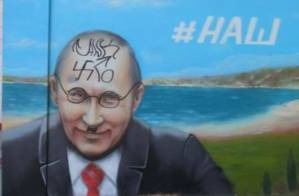 One of the anti-Putin billboards reported on Sobytiya Kryma, found while looking in vain for ’calls to mass disturbances and extremism’

Russia’s Roskomnadzor, officially Russia’s media regulatory body, has informed two websites providing information about events in Crimea that they are to be blocked on Russian territory, including Russian-occupied Crimea.

The letters sent to both Sobytiya Kryma [Events in Crimea] and the Centre for Journalist Investigations make the same accusations, although the Centre’s letter cites a specific article.  Russia’s censor alleges that the information on the websites “contains calls to mass disturbances, extremist activities or participation in mass (public) events carried out with infringements of established procedure”.

Sobytiya Kryma states that this is a new precedent in the use of sanctions against the Crimean electronic media.  It doubtless is, but the fact that two websites have been targeted simultaneously, suggests that a major crackdown on this last bastion of the independent press available to Crimeans is underway.  Certainly the de facto prosecutor, Natalya Poklonskaya recently stated that a number of websites had been blocked as ‘extremist’, but gave no details.

The two Internet publications targeted so far are independent and present both an alternative view of events in Crimea, and information that will not be found in the mainstream Crimean media -  about human rights infringements, for example.

Since the websites cannot be blocked outside Russia, it is easy to check what kind of ‘extremism’ is involved, considerably harder to find the alleged ‘calls to mass disturbances’.

On Oct 3, for example, Sobytiya Kryma reported that a Sevastopol bus driver was being checked out for ‘extremism’ after being denounced by a passenger for listening to supposedly “anti-Russian jokes” on the Ukrainian programme ’95 Kvartal’.

It also informs, citing the Ukrainian newspaper Dzerkalo Tyzhnya, that Olha Tymoshenko, former head of the Yevpatoria Ukrainian School, would face prosecution on two charges of ‘separatism’ if she returns to Crimea.   Tymoshenko told Dzerkalo Tyzhnya that the occupation regime is claiming that she was planning to come to Yevpatoria on May 9 [Victory Day] in order to carry out a ‘terrorist act’.  She explains also that in Spring 2014, she was forced to resign, being told that if she didn’t, they’d come up with some criminal charge against her.

The site also shows “yet another Putin-Hitler” piece of graffiti, citing a Kerch publication.

The Centre for Journalist Investigations has long been a target for Russia’s FSB, although, like Sobytiya Krym,  the site and many of its journalists moved to Kyiv fairly soon after Russia’s occupation.  That they were wise to do so became abundantly clear back in March this year when Natalya Kokorina, an editor for the Centre was detained and subjected to around 6 hours interrogation in Simferopol and a 4-hour search was carried out of her parents’ home.  Kokorina was questioned as a witness over an article published by the Centre about Crimeans fighting in Donbas and their hope for Crimea’s return to Ukraine.  The author of the article, Anna Andriyevska would face criminal prosecution if she returned to Crimea, and her parents have faced harassment  (a detailed account of the article in question can be found at Wave of Repression against Independent Crimean Journalists).

18 months after Russian invaded and occupied Crimea, most Crimean Tatar and Ukrainian-language media have been silenced or forced to move to mainland Ukraine.  One blogger, Yury Ilchenko, is in custody, almost certainly in connection with articles where he condemned Russia’s annexation of his native Crimea.  Other bloggers and journalists, or their families, have faced enough harassment and threats to make it clear that they would be in danger in Russian-occupied Crimea.

There are ways of bypassing such blocks, but the fact that they are now being imposed is the latest blow for freedom of expression and access to information in Crimea under occupation.