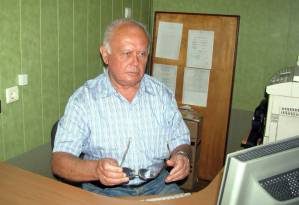 The preliminary court hearing took place on Oct 5 in the Kafkaesque trial of 73-year-old Yury Soloshenko, a pensioner from Poltava in Ukraine.  He is facing charges of ‘spying on behalf of Ukraine’, but this is effectively all that is known.  It is, however, enough to make it entirely clear that the case is fabricated, since the retired director had no secrets to disclose.

As reported Soloshenko has now been held in the Lefortovo Prison in Moscow for 14 months, with only state-appointed lawyers allowed to see him.  The case material has been classified as ‘secret’, and Ivan Pavlov, the lawyer Soloshenko and his family had chosen was illegally prevented from seeing his client, and thus effectively forced off the case.

The only contact Soloshenko seems to have is with human rights activist Zoya Svetova, who has been able to visit him in prison and adds a few new details on the circumstances behind his arrest.   He came to Moscow in August 2014 for a meeting with a former business partner from Russia’s Defence Ministry with which he had long cooperated. She explains that this cooperation was regulated by an inter-governmental agreement signed in 1993.  It was apparently dissolved on May 20, 2014, soon after Russia’s annexation of Crimea.

It is unclear what exactly was dissolved. Not only is Soloshenko retired, but the factory that he worked for is no longer functioning.  It is more than likely that the elderly pensioner had no idea that anything had changed and was, as his son has suggested, tricked by a former colleague.

Svetova notes that, like all cases involving treason or spying charges, you can only find out about the charges after a verdict has been issued. All parties, from the investigator and defence lawyers to Soloshenko’s relatives, have been forced to sign undertakings not to disclose any information.

He appears to be accused of planning to transport to Ukraine some kind of large weapons in a KAMAZ military truck, with this carrying a sentence of between 7 and 20 years.  Soloshenko was 72 when arrested, with a heart condition and other health issues.

Back in April this year, Svetova wrote of the refusal to allow Soloshenko to see his chosen lawyers and other infringements, saying that she had never seen such flagrant violation of Russia’s Constitution as in this case.

Soloshenko’s isolation is almost complete making him especially susceptible to pressure and manipulation by the investigators.  He is in a cell for two, with the cellmate often changing, but seemingly planted there to advise Soloshenko “to confess”.  The investigator and state-appointed lawyer also promise that he will be released if he ‘confesses’. The investigator sometimes threatens Soloshenko with a long sentence, at other times promises a suspended sentence and freedom.

For a long time Soloshenko was also held without access to the consul, but this changed after the two military intelligence officers were captured by Ukrainian forces.  They were allowed to see the Russian consul, so suddenly Soloshenko got permission for a visit from Ukraine’s consul.

Soloshenko has told Svetova that the FSB investigator advised the elderly man to ask the consul for a letter from Ukraine offering to exchange him for the captured intelligence officers.  He is clearly pinning his hopes on such a letter, which Svetova says has long been written.

Svetova also hopes that Soloshenko will be released, however it seems likely, after holding the pensioner prisoner for over a year, that the court will find him guilty of the mystery charges and sentence him to a real term of imprisonment.

This, she warns, would likely be a death sentence for Yury Soloshenko.