Judicial Review demanded for Life Prisoners Tortured into ‘Confessing’ to Anything 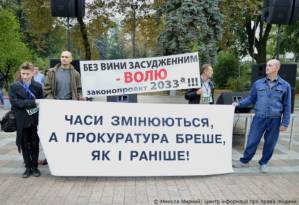 Protest outside parliament on Oct 6, attended by both civic activists and the relatives of life prisoners - the banners call for those who are innocent to be freed, and states that "the times change, but the prosecutor’s office lies like it always did (photo by Mykola Mirny from the Human Rights Information Centre)

Civic activists are calling on Ukraine’s legislators to rectify an anomaly that prevents life prisoners having their sentences reviewed.  Even in countries with a well-developed judicial system, miscarriages of justice are possible. In Ukraine there are serious grounds for concern about a number of cases making the lack of possibility of judicial review scandalous.

Andriy Didenko from the Kharkiv Human Rights Group explains that the specific problem arose in 2010 as a result of the so-called ‘judicial reform’ carried out shortly after Viktor Yanukovych became President.  As reported here, the so-called ‘reform’ was mostly aimed at increasing control over the judiciary.  It almost totally stripped the Supreme Court of its customary powers and gave an unwarranted and unconstitutional degree of power to the High Council of Justice.

One of the powers which were removed from the Supreme Court was that of reviewing criminal cases as exceptional proceedings. Since 2010, there has thus been no possibility of gaining just a review.

A draft bill now tabled in parliament would enable judicial review of all cases where people received life sentences under the old Criminal Procedure Code if there are grounds for fearing a miscarriage of justice.  This, for example, would include evidence suggesting that the testimony was obtained through illegal means, or where the sentence did not seem proportionate to the case.

If the law is passed, all life prisoners falling into the above category will have until the end of 2017 to apply for a review.

There are 10 cases which KHPG is aware of where people are serving life sentences with the conviction based entirely on confessions given under torture and then retracted in court.  Didenko, for example, mentions the cases of Maxim Orlov; Volodymyr Panasenko; Oleksandr Rafalsky;  Merab Suslov and others. ‘

Maxim Orlov, who was 20 at the time, and 14-year-old Oleksandr Kozlov were convicted of double murder despite numerous discrepancies in the prosecution’s case.  Orlov got a life sentence, Kozlov – 14 years.  The prosecution’s case was based solely on Kozlov’s testimony allegedly obtained through the use of torture and without a lawyer present.

Volodymyr Panasenko was convicted of a bomb blast which seriously injured the director of the Shuvar Market and killed a young girl who was passing the car that exploded.

30-year-old Oleksandr Rafalsky was sentenced to life imprisonment in July 2004.  He had been arrested in June 2001, together with a woman friend and taken to the Central Police Station in Kyiv.  They were ‘interrogated’ separately.  Rafalsky alleges that he was beaten and kicked for several hours in order to force him to sign a confession.  He says that he heard moans and crying from his friend in a nearby room. .

The torture continued with his condition worsening and several times requiring medical intervention.  The officers, he alleges, even subjected him to a mock execution.

Human rights groups have campaigned actively for a proper investigation into the allegations of torture which clearly place his conviction and life sentence in serious doubt.