Russia: Artificial ComaAdd Your Signature to Amnesty International Germany’s Declaration on Russian InjusticeMikhail Khodorkovsky: Final StatementCruel torment of the former Vice-President of YUKOS, Vasily Aleksanian may be overMoscow: Trial of gravely ill Aleksanian to be continuedA Squalid year for Russian justiceEuropean Court of Human Rights demands Aleksanian’s immediate release from custodyFormer YUKOS Vice-President Aleksanian may be released on bailPunishment without trial to continue for gravely ill former YUKOS Vice President Vasily AleksanianVasily Aleksanian is chained to his bedVasily Aleksanian’s lawyers still not given accessVasily Aleksanian to get treatment outside Russian SIZODeath is not subject to appealThe Quality of MercyVengeance to the endMikhail Khodorkovsky declares hunger strike over the authorities’ treatment of AleksanianToo much is at stakePACE may exert pressure on Russia over AleksanianVengeance is ours …“We’re not celebrating today” – digest of Russian protests (early June 2022)
• Topics / News from the CIS countries 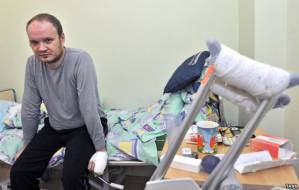 In hospital after the attack in 2010

In 1973, the Nobel Prize-winning Russian writer and dissident Aleksandr Solzhenitsyn sent a letter to Soviet leader Leonid Brezhnev denouncing, among many targets both at home and abroad, Marxism and the "ideological lies that are daily foisted upon us."

Five months later, Solzhenitsyn was expelled from the Soviet Union after The Gulag Archipelago was published in the West. His missive to Brezhnev, a political manifesto titled A Letter To The Soviet Leaders, was published shortly after his forced exile. The Soviet leader never responded.

The vitriol in the dispatch, titled A Letter To The Leaders Of The Russian Federation and addressed to Putin and Prime Minister Dmitry Medvedev, is driven by what Kashin calls a concerted effort by authorities to stymie the investigation into his vicious beating almost five years ago.

But it broadens into an indictment of what he portrays as Putin’s corruption-ridden 15-year reign that has been "a monumental moral catastrophe for our generation" and "left the nation demoralized and disoriented."

"Whoever comes after you will have to create Russia all over again, from scratch, " Kashin writes in the open letter, which he published on his website on October 3. "This is your only service to history -- what you’ve spent 15 years achieving."

(Global Voices has published an English-language translation of the full text here.)

The text has sparked wide debate among Russian-language social-media users in the antigovernment camp. Admirers,  like the political commentator Maxim Trudolyubov, portray it as a potentially historic document of the Putin era.

Trudolyubov, a political commentator and editor with the respected business daily Vedomosti, wrote that like Solzhenitsyn’s letter to Brezhnev,  Kashin’s text could ultimately "anticipate" his "society’s exit from a conformist stupor."

Meanwhile, detractors, like Russian Internet pioneer and Kremlin critic Anton Nossik, say Kashin is naive to think the letter will have any impact on Putin or Medvedev, who will likely be "amused" by the screed.

Why exactly -- aside from Kashin’s indisputable talent for polemics -- has this text resonated so forcefully among Russia’s politically plugged-in? After all, there is no shortage of harsh criticism lobbed at Putin by opponents such as Aleksei Navalny, who has been convicted twice on criminal charges he calls retribution for his activism.

In part, it’s due to Kashin’s own professional background, namely his reporting for several Kremlin-loyal publications, like the newspaper Vzglyad,  linked to Vladislav Surkov, a Kremlin aide and an architect of Putin’s political system.

"And this is his path, and it’s very important that a person who supported this regime and this construction, took this long path, " said Venediktov, adding that publishing such "invective" against Putin could be "unsafe" for Kashin.

Then, of course, there are the circumstances surrounding the investigation of the November 2010 beating Kashin suffered in central Moscow at the hands of assailants wielding steel pipes.

Kashin survived but suffered two broken legs, mangled fingers, a damaged skull, and multiple jaw fractures. Following the attack, Medvedev -- then Russia’s president -- vowed that the perpetrators would be caught.

The journalist told RFE/RL’s Russian Service in an October 5 interview that when he met Medvedev in Israel following the attack, the then-Russian president told him: "It’s crucial to tear the heads off the criminals -- the organizers and the executors -- no matter who they are."

But while the suspected attackers have been rounded up, there’s no indication that authorities are planning to pursue a top official who allegedly ordered the beating: Pskov Governor Andrei Turchak,  a loyal Putin ally who had exchanged harsh words with Kashin online prior to the assault.

One suspect, Danila Veselov, told investigators that he met with Turchak and a man who allegedly organized the attack prior to the incident. The governor, Veselov claimed, said that "ideally" Kashin’s hands would be injured so that he "can’t write all that slander."

In the open letter, Kashin wrote: "You like to think of yourselves as the heirs to two empires, tsarist and Soviet. But the tsars sent criminals to hang; they didn’t put them in governors’ chairs."