Russian jailed for 12 years for mystery ‘spying for Ukraine’ 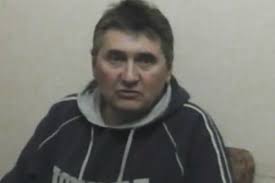 In the latest of a number of ‘spying’ cases brought by Russia in the months following its annexation of Crimea, Viktor Shur, about whom virtually nothing is known, has been convicted of ‘spying for Ukraine’ and sentenced to 12 years maximum security imprisonment

The Bryansk Regional Court reports that Shur was convicted on Oct 7, 2015 of state treason through spying (Article 275 of the Russian Criminal Code).  He is supposed to have, on Dec 9, 2014, “carried out intelligence activities in the Bryansk oblast – gathered information constituting a state secret about a protected Defence Ministry site on the commissioned of Ukraine’s State Border Service. Had the information gathered been passed to Ukraine’s Security Service, the latter could have used it against Russia’s security”.

The most chilling echo of Soviet times is not in Russia’s mounting spymania, which was first seen some 10 years ago, but in the fact that people held incommunicado, probably with only state-appointed lawyers, are said to have “fully confessed” to almost certainly spurious charges.

Nobody had even heard of Shur until July this year when the Lefortovo District Court in Moscow extended his detention, together with that of two other men: Yevgeny Chistov and the former co-owner of the Elektrooptika research and industrial facility, Maxim Lyudomirsky.

All spying and state treason cases are ‘top secret’ in Russia until the trial.  In this case, it is not clear whether anybody now understands more than that the FSB claimed that Shur was spying for Ukraine and that the defendant, for reasons unknown, ‘confessed’ to it all.

The charges in other cases are also shrouded in secrecy, but there is more clarity about the means used to obtain ‘confessions’.

Two Ukrainian nationals are also currently in detention in Moscow, both charged with ‘spying’.  As reported, the trial is beginning of 73-year-old Yury Soloshenko, a pensioner and former director of a Poltava factory, no longer functioning but which once specialized in high-frequency electro vacuum lamps used in anti-aircraft warfare.  The factory had always cooperated closely with Russia, whose orders were vital for its existence and against whom it could not have any secrets.  And the factory has long been bankrupt anyway, meaning that nobody seems to know what kind of ‘spying’ Soloshenko could have been engaged in.

The 73-year-old is in poor health, with a heart condition which precludes any physical pressure on him, but he is clearly under psychological pressure, including from the state-provided lawyer, to ‘confess’ as the only hope of returning to his home in Ukraine, his children and grandchildren.

The investigators illegally stopped Soloshenko from seeing the lawyers taken on to defend him, and all information about the case is classified as secret.  One of these lawyers was Ivan Pavlov, who back in March played a major role in getting the charges of ‘state treason’ dropped against Svetlana Davydova.  Davydova, a mother of seven, including a 2-month-old daughter whom she was still breastfeeding, had been arrested and taken to Moscow, where she was remanded in custody on charges of ‘state treason’ over a phone call to the Ukrainian embassy warning them of Russian soldiers being sent to fight in Donbas. The ‘lawyer’ provided by the investigators (Andrei Stebenev) sought only to get Davydova to ‘confess’ and made no effort to stop the court from remanding Davydova in custody.  It was Pavlov who managed to first get Davydova released, and then get it through to FSB officers eager for the promotions that follow treason or spying charges that this one was heading for disaster.  Davydova could only be convicted of treason if the information she passed on was correct, and Russia is continuing to deny its undeniable military engagement in eastern Ukraine.

There is little known about the other Ukrainian, 30-year-old Valentin Vihivsky who set off for Simferopol on Sept. 17, 2014 and was supposed to return two days later.  It was only in the middle of October that his father finally learned that he had been taken to Moscow and placed in the Lefortovo Prison.

Ukraine’s Foreign Ministry was told only that he is charged under Article 183 of the Russian criminal code (illegally receiving and disclosing information constituting a commercial, tax or banking secret). A few months later, the State-appointed lawyer Vladimir Goryachev informed Vyhivsky’s family that the charges could be changed to espionage (Article 276).

It is ominously significant that human rights activist Zoya Svetova has visited both Soloshenko and Vyhivsky in Lefortovo.  The 73-year-old is grateful for the visits and provides any information that he can.  Vyhivsky, on the other hand, didn’t want to talk about his case at all and even refused to say which article of the criminal code he’s charged under.   She believes that he has probably been persuaded to ‘confess’ so as to get a lighter sentence.

The means of persuasion have been described in detail by other Ukrainian hostages held in Russia, like Oleg Sentsov; Oleksandr Kolchenko; Gennady Afanasyev; Serhiy Litvinov and the two Ukrainians now on trial in Chechnya, Mykola Karpyuk and Stanislav Klykh.