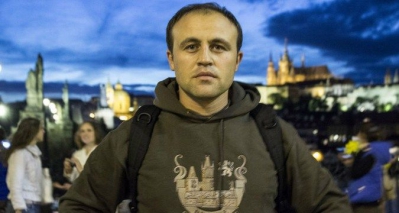 Eskender Nebiyev, a cameraman for the independent Crimean Tatar TV channel ATR, has been taken into custody again on absurd charges relating to a pre-annexation demonstration in Crimea on Feb 26, 2014. The occupation regime is holding Crimean Tatar leader Akhtem Chiygoz and two other Crimean Tatars in custody over a protest they have no jurisdiction over.

Nebiyev had previously been released, pending trial and this new move seems an overt act of intimidation, possibly linked to the ongoing Crimea Blockade as well as retaliation for public statements over the last few days.

Nebiyev was initially detained on April 20 and remanded in custody for 2 months.  He was then released on the personal guarantee of the spiritual leader of Crimean Muslims, Emirali Ablayev.  Russia is in breach of its own legislation over the so-called ’26 February case’, but Nebiyev’s arrest added another disturbing element, since ATR has stated clearly that Nebiyev was present at the demonstration in his professional capacity.

Bekir Nebiyev, the cameraman’s father was in the news recently as the chief suspect in the shooting of an ambulance crew in which two medical workers were killed.  QHA explains that the family wrote an open letter to the victims’ relatives, assuring them that they were fully cooperating with the investigation in trying to find out where Bekir Nebiyev is.  They also asked people not to seek any political, provocation or ethnic elements in what was “a crime committed by one person against other people”.  The de facto authorities in Russian-occupied Crimea did appear to be using the fact that the main suspect was a Crimean Tatar for their own ends and there was no observance of the presumption of innocence.

Bekir Nebiyev’s body was found on Saturday afternoon, just hours after his son’s arrest was announced.  It is unclear how strong the evidence was against Nebiyev Senior, but the timing, the secrecy around the discovery of his body, and the speed with which the authorities have suggested that this closes the investigation has aroused concern among those following events in Crimea.

On Oct 8, Eskender Nebiyev wrote on his Facebook page about all that had happened during the last months: about the death of his grandfather and serious illness of his father which his family didn’t tell him about while he was in detention. His family is now being subjected to daily interrogations, although he stresses that there can be no suggestion that they are concealing his father’s whereabouts.

The following day, the de facto prosecutor Natalya Poklonskaya demanded during a court hearing that the judge remand Eskender Nebiyev in custody until the next court hearing in the so-called ’26 Feb 2014 case’.  This is a legal nonsense which the occupation regime is using against the Mejlis or Crimean Tatar representative assembly, and where only Crimean Tatars are targeted.

At the demonstration on 26 Feb 2014, there were around 10 thousand Crimean Tatars and Maidan supporters who gathered outside the parliament building in Simferopol because they feared plans were underway to push through a bill changing Crimea’s status.  They were opposed by a smaller number of pro-Russian demonstrators led by Sergei Aksyonov, then the leader of a marginal pro-Russian party in the Crimean parliament.  Aksyonov was installed as self-proclaimed leader the following day after Russian soldiers seized control.

Radio Svoboda reported at the time of Chiygoz’s arrest that their video footage clearly showed all representatives of the Mejlis seeking only to calm the crowd and prevent bloodshed.  This was also confirmed by a Russian journalist Pavel Kanygin, writing for Novaya Gazeta, and present during the demonstration on Feb 26, 2014

The first arrest was of Akhtem Chiygoz, Deputy Head of the Mejlis, on Jan 29, 2015.  It was obvious from the outset that Russia had no intention of releasing Chiygoz from custody.  There appears to be only one reason for holding two other people – Ali Asanov and Mustafa Degermendzhy in detention, that being to extract false testimony against Akhtem Chiygoz, – or to punish them for not giving it.  Asanov and his family have reported from the outset that he was clearly told that he would be freed if he denounced Chiygoz.  Asanov is the only breadwinner, and has four small children and an ailing father, all of whom the occupation regime is using as hostages.

In the most disturbing twist, Poklonskaya has now claimed that Nebiyev had previously made a deal with the investigators, fully “acknowledged his guilt”, with this meaning a more lenient sentence.  None of this was mentioned before, and the timing arouses serious questions.

‘Cooperation with the investigators’ has become a euphemism for providing testimony against others.  Given the absurd nature of the criminal proceedings, any ‘confession of guilt’ must be viewed with scepticism, as must any ‘testimony’ extracted as justification for the occupation regime’s ongoing offensive against the Mejlis.