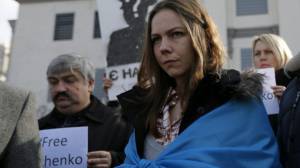 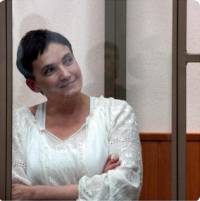 Russia has demonstrated the nature of the ‘trial’ of Nadiya Savchenko by banning her sister who is a vital witness from entering Russia for the next five years.  Vera Savchenko reported on Tuesday evening that she was stopped on the Russian border and informed by the Russian border guards that the ban was at the initiative of Russia’s FSB or Security Service.

It seems, however, that Vera Savchenko was not given any piece of paper which is the ploy Russia used last year when banning Crimean Tatar leaders Mustafa Dzhemiliev and Refat Chubarov from their homeland.  Their bans were  real, and enforced, but the scrap of paper in one case and lack of any in the other made it difficult to challenge them through the courts.

Defence lawyer Mark Feygin assumes that the ban has been explained as required out of national security considerations.  His colleague Nikolai Polozov notes drily that for over a year Vera Savchenko posed no threat to national security, and only now, on the eve of her testimony in court, have the FSB found her a danger.  Certainly Vera herself is in no doubt that the ban now must  be viewed as an attempt to stop her from testifying.

The defence plans to appeal against the ban, however if it really is a real ban, then it can be pessimistically assumed that no court will buck the FSB.    Worth noting that back in February this year, a Russian court found no problem with upholding the ban imposed after Russia’s annexation of Crimea on 71-year-old Mustafa Dzhemiliev as being “to ensure the state’s defence capacity and security, and to safeguard public order.”

Feygin predicts that there will be fireworks in court on Thursday when Nadiya Savchenko learns of the ban.

Each hearing has highlighted the surreal level of lawlessness in this case.  Savchenko has been held in Russian detention since late June 2014, with every judge agreeing that she should remain in custody despite a cast iron alibi for the impugned crime.

As reported, the witnesses for the prosecution have given testimony which would be comical if the context were not so serious.  The person alleged to have driven Savchenko to the Voronezh oblast claims to have received 25 thousand rubles ‘for travel expenses’ for taking ‘humanitarian aid’ to Donbas, and then to have given 15 thousand of this to Savchenko.

The presiding judge has allowed witnesses to conceal information that would enable the defence to prove that they are lying, while constantly stopping Savchenko’s lawyers from asking questions that have clear relevance to the case.