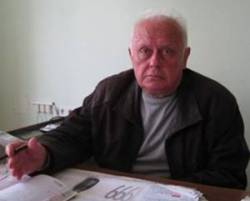 In a closed trial held after Yury Soloshenko was denied access to the lawyers of his choice and to the Ukrainian consul, a Russian court has sentenced the 73-year-old pensioner with no access to state secrets or Russian weapons to 6 years maximum security imprisonment.   The prosecutor had demanded 10 years, the minimum sentence under Article 276 of the Russian Criminal Code).  It is unclear whether  Moscow City Court Judge Andrei Rasnovsky was moved by a quiver of conscience to give a shorter sentence, or whether an age restriction was applied.

The charges against Soloshenko only became known with his sentence, although Soloshenko has been in detention since August 2014, when he was arrested shortly after arriving from Poltava for a meeting with a former colleague.  Nothing was known of the charges, and Ivan Pavlov, the lawyer whom Soloshenko and his family took on, was systematically and illegally prevented from seeing the imprisoned pensioner.  It seems likely that Pavlov was viewed with particular antagonism by Russia’s FSB after he succeeded in getting breastfeeding mother of seven Svetlana Davydova released from custody and the charges of state treason for a phone call to the Ukrainian embassy dropped.  In both cases, and in other recent prosecutions for so-called spying, a state-appointed lawyer was used whose role seemed to lie in encouraging the person detained to ‘confess’.

Over the last 14 months Soloshenko was held in the Lefortovo Prison in Moscow where he was visited a number of times by human rights activist Zoya Svetova. She wrote back in April that in all her years of visiting remand prisoners, she had never seen such flagrant violation of Russia’s Constitution as in the case of Yury Soloshenko.

In all her reports, it was clear that Soloshenko denies any ‘spying’ or illegal activities, and this would doubtless have been the position taken in court had he not illegally been deprived of proper legal defence.  Instead, he was pressured into rejecting Ivan Pavlov and his team, and the state-appointed lawyer Gennady Blokhin reports that Soloshenko ‘confessed to spying for Ukraine’.  Blokhin says that he will not be appealing against the sentence, and suggests that Soloshenko could be extradited to Ukraine.

Since the file material was classified as ‘secret’, even the sentence was announced behind closed doors, not to mention the ‘trial’ itself.

The FSB Press Service reports that Soloshenko was arrested by the FSB in August 2014 in Moscow “when trying to illegally purchase secret components for S-300 surface to air missile systems. He was acting on behalf of the State enterprise “Generator Factory” and the “Skies of Ukraine” Corporation, and the items which were to be bought were intended for reinstating Ukraine’s air defence system”.

Svetova reported back in August that the FSB appeared to be making some kind of promises to Soloshenko, probably in exchange for his giving up the lawyer whom he had chosen and accepting Blokhin.  Soloshenko had clearly been given the hope that he would receive a suspended sentence.  This is not the first time that he and other Ukrainians held in Russian detention have been deceived.

Yury Soloshenko is 73 and in ill health, with a heart condition. His other son Oleksandr says that it is immaterial whether the sentence is 6 or 20 years - either way this is a death sentence.