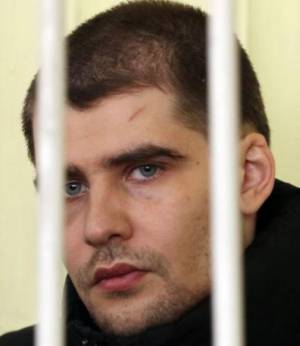 Legal nihilism continues in the treatment of Euromaidan activist Oleksandr Kostenko, sentenced to almost four years imprisonment in Russian-occupied Crimea on absurd charges pertaining to an alleged and unprovable offence in Kyiv before annexation.  A cassation appeal is still to be held against Kostenko’s conviction, yet the de facto authorities have refused to allow his mother and formally recognized civic defender  to see her son and there is reason to believe that he may have been taken to a prison in Russia.

Dmitry Sotnikov, Kostenko’s lawyer, stresses that the refusal to allow Yelena Kostenko to see her son can be considered a violation of Oleksandr’s right to defence.  Since the cassation appeal is after a sentence has come into effect, the de facto authorities are in principle allowed to move Kostenko to a prison, but they had to inform both Sotnikov and Yelena Kostenko of his whereabouts which they have failed to do.  This means that on the eve of the cassation appeal, the defence has lost any contact with Kostenko.

The fact that he appears to have been moved to Russia is also of legitimate concern. As with other Ukrainian nationals from Crimea (Oleg Sentsov, Oleksandr Kolchenko, Gennady Afanasyev and Khaiser Dzhemiliev), Russia has illegally foisted Russian citizenship on Kostenko.   Olha Skrypnyk, Deputy Head of the Crimean Human Rights Field Mission stresses that international humanitarian law does not envisage prisoners’ removal from annexed territory.  She also believes there is a real risk to the life and health of the former Ukrainian police officer and Euromaidan activist who was convicted by a Russian court for actions allegedly committed in Ukraine.

The arrest, detention and trial of Oleksandr Kostenko have been marred by grave infringements of his rights.  Kostenko was taken into custody a full day before any charges were brought against him, and there is physical evidence, including a broken arm, to corroborate Kostenko’s assertion that he was tortured. At a press conference in Kyiv on Aug 18, Sotnikov spoke also of the torture and ill-treatment his client had been constantly subjected to in the SIZO [remand prison].  While it was co-cellmates who had ill-treated him, it seemed likely that this had been on the orders of the SIZO head.

Kostenko was charged with and in May convicted of having slightly injured a Crimean Berkut officer on Feb 18, 2014 during the EuroMaidan protests in Kyiv.  This was deemed to fall under Article 115 § 2.b  of the Russian Criminal Code (deliberately causing mild damage to health for motives of political, ideological, racial, ethnic or religious hatred or enmity, or for the same motives in relation to a social group).

Kostenko’s lawyer has pointed out that the charge could only carry a sentence of  community work since the prosecution had been unable to claim that the Berkut officer had been a Russian law enforcement officer at the time of the alleged deed.  He believes that the second charge was thrown in to ensure a term of imprisonment.  Kostenko was also charged under Article 222 § 1 (unlawfully obtaining, keeping or carrying the main parts of a firearm”).  The investigators claimed to have found a rifle barrel when searching his home.  Kostenko and his lawyer say that the rifle barrel was planted, and certainly none of the safeguards against evidence being planted were applied.

The investigators claimed that in Jan 2014 Kostenko joined the EuroMaidan protest in Kyiv “in order to show armed resistance to law enforcement officers”.  On Feb 18, so the investigators’ version goes, “out of a feeling of ideological hatred and enmity to law enforcement officers” he deliberately aimed a cobble stone at V.V. Poliyenko, an officer of the Crimean Berkut special force unit.  This supposedly resulted in Poliyenko receiving an injury “in the form of a large haematoma on the left shoulder”

In June the authoritative Memorial Human Rights Centre declared Kostenko a political prisoner, and spoke of serious grounds for believing him to have been abducted and subjected to torture.

In an interview to RIA Novosti, Poklonskaya claimed that none of Kostenko’s complaints had been corroborated, and that there had been no further complaints.  Her words were roundly condemned by Dmitry Sotnikov as total lies.  Sotnikov and  Kostenko’s family are asking people to help find out Oleksandr’s whereabouts and to ensure that he is not in any danger.

PLEASE write to the Russian Prosecutor General expressing concern over this case and demanding to know Kostenko’s wherebouts.  You could also note the failure to properly investigate serious allegations of torture; and the present violation of Kostenko’s right to defence by refusing to allow his defender to visit him.

Be firm but respectful in tone.

The Prosecutor General’s Address (in Russian):