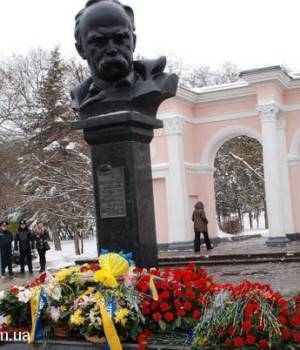 Police and ‘anti-extremist’ squads were on high alert in Russia-occupied Crimea on October 14, Day of the Defender in Ukraine.  They leapt into action in the early morning, surrounding the monument to Ukrainian poet Taras Shevchenko which Ukrainians had laid a huge number of flowers at during the night.

Holos Krymu [Voice of Crimea] writes that since Russia occupied Crimea, the Shevchenko monument has become a “symbolic small piece of Ukraine” to which Ukrainians come to celebrate Ukrainian national holidays.  “This simple wish has, however, over the last year and a half become highly dangerous for them. After all any such demonstration of love for their native land ends, as a rule, in detention and interrogation for several hours”.

Indeed, three members of the Ukrainian Cultural Centre were later detained by police and hauled off for interrogation at the so-called Centre for Countering Extremism.

Leonid Kuzmin, head of the Ukrainian Cultural Centre [UCC], says that they arrived at the Khmelnytsky monument close to evening and had scarcely done anything when they were approached by police officers and a few men in plain clothes who demanded to see their documents.  Having ascertained that all three had their documents with them, they made them come with them to the Centre for Countering Extremism where they were questioned for around 2 hours, had all the phone numbers on their mobiles recorded, before being released.

The ‘anti-extremism’ officers wanted to know the purpose of their action and why they’d wanted to lay flowers.  Most ominously, though thus far inaccurately, they claimed that the Ukrainian Cultural Centre is an ‘extremist’ organization and falls under Article 2.82 of Russia’s Criminal Code (creating an extremist organization or society).

The main claim, however, appears to have been that they were attempted to hold an unauthorized demonstration – all three of them.

None of this is new unfortunately, as Leonid Kuzmin knows all too well.  On March 9, 2015, Kuzmin organized and Shukurdzhiyev and Oleksandr Kravchenko took part in a totally peaceful gathering marking the 201st anniversary of the birth of Ukrainian poet Taras Shevchenko.  The event can be viewed here: https://youtube.com/watch?v=j0_9MjntQdk

All three men were detained, interrogated over likely ‘extremism’ and then sentenced to 40 hours of community service, with Kuzmin also threatened with dismissal from his teaching job.  He was later also attacked.

The three men were charged with “infringement of the established procedure for organizing or holding a gathering, rally, etc.” and later questioned in the same ‘Centre for Countering Extremism’.  It was clear, however, from the court hearing that their ‘offence’ lay for the police – and most worryingly, the court – in the Ukrainian flag which a police officer actually called a “prohibited symbol”. (See:  Crimean Court Finds Ukrainian Flag a “Prohibited Symbol”)