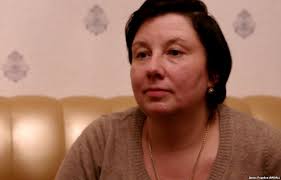 The trial has begun in Yekaterinburg of a Russian woman accused of ‘inciting inter-ethnic enmity’, otherwise known as reposting material on the social network VKontakte critical of Russia’s policy with respect to Ukraine.  Russia’s Investigative Committee claims that six publications posted by Yekaterina Vologzheninova are aimed at inciting ethnically motivated enmity, as well as enmity towards representatives of the Russian authorities.

Just before the New Year break in December last year, Investigative Committee [ICRF] officers carried out a search of Vologzheninova’s home and then took her to the ICRF for questioning.  She was informed of criminal charges under Article 282 of the Criminal Code (inciting hatred or enmity, and denigrating human dignity).

to Open Russia that she was accused of sharing links to documentaries and programmes about events in Ukraine, including ‘The Winter that changed us’ and the programme ‘Brave Hearts’.

It is easy to find the first documentary mentioned, very much harder to understand how this is supposed to incite ethnic enmity and calls to extremism.  Vologzheninova says that all the material they accuse her of sharing was of a historical nature, or chronicled events.  She is no politician, she says, nor civic activist, but she is interested in points of view alternative to that presented by Russian federal channels.

During that first interrogation, they grilled her about any links with ‘Ukrainian extremist organizations’, and why she knew some Ukrainian (which she has learned out of interest only).

It took ICRF over 10 months to prepare their charges, but unfortunately they have, and the trial began on Oct 13.  Vologzheninova’s lawyer Roman Kachanov the ‘expert assessments’ of the 6 publications and says that no nationality is described in a negative fashion, and there is no incitement to enmity.  The whole case is pulled out of the air, he says, and linked with the fact that his client does not support Russia’s position on Ukraine.

“She simply published material from other parts of the Internet.  She wasn’t the author of any of them, and made no changes to them”.

The next hearing is due on Oct 27.

‘Court’, ‘trial’ and ‘hearing’ should be understood in the loosest possible way since the Russian authorities have yet again ignored the presumption of innocence and already added Yekaterina Vologzhenova to the ‘’ (no. 983 of a list currently containing 4, 431 names).   Her bank card has been blocked.

All of this is identical to the treatment of Russian poet and teacher Alexander Byvshev who in July this year was convicted of ‘inciting enmity’ and sentenced to 300 hours of community service.  He also had his computer confiscated, was labelled an ‘extremist or terrorist’ and was prohibited from working as a school teacher for two years.  In his case this was for the poem ‘’ in which he expresses his opposition to Russia’s annexation of Crimea and suggests Ukrainians should ensure that not one inch of Crimea is handed “to Putin’s chekists” (see: Russian poet sentenced over poem in support of Ukraine).

The consequences can be much worse, as the 3 year sentence passed on Rafis Kashapov shows.  He was convicted on the same charges, as well as of ‘public calls to violate Russian territorial integrity’ over criticism of Russia’s annexation of Crimea and of Vladimir Putin.  The innocuous posts, also on VKontakte, are described here:  3-year sentence for criticizing Putin and Russia’s annexation of Crimea