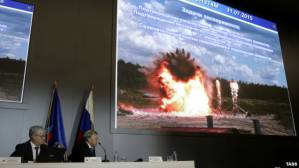 MOSCOW -- As Western media broadcast somber footage from a darkened room in the Netherlands dominated by an assembly of dented, shrapnel-riddled pieces of a passenger jet shot down over Ukraine’s conflict zone last year, the pictures on Russian TV on October 13 were dramatically different.

Rossia 24 showed President Vladimir Putin on stage at a conference in Moscow, making upbeat comments about Russia’s economy while the text crawl underneath trumpeted news of its bombing campaign in Syria: Dozens of sorties flown, many targets hit, two Islamic State “headquarters” destroyed.

On their front pages and Internet sites, Russian media moved headlines that seemed aimed at absolving Moscow of any of the blame for the downing of Malasyia Airlines flight MH17, which crashed on July 17, 2014, on territory held by Russia-backed rebels in eastern Ukraine. “Experts Say MH17 Might Have Been Downed By Ukraine, ” state news agency TASS tweeted:

It was all part of what appeared to be a carefully considered campaign to push back against the news coming out from the Netherlands, where the Dutch Safety Board issued a report stating what many in the West already suspected: that the airliner was shot down by a Buk missile made in Russia and fired from an area held mostly by Russia-backed separatists.

None of the 298 people on board survived the crash, which brought tension over a war between Russia-backed rebels and Ukrainian forces that has killed more than 7, 900 civilians and combatants since April of that year to a new level. Ever since, the Kremlin has scrambled to counter evidence suggesting the rebels shot the Malaysia-bound Boeing 777 down.

WATCH: What do you get when a surface-to-air missile manufacturer conducts its own MH17 investigation?

Those efforts went into overdrive early on October 13: A few hours before the Dutch Safety Board even presented its findings, Russia put in place the linchpin of its campaign -- a report prepared by Almaz-Antey, the state-controlled arms manufacturer that produces Buk missiles.

At a press conference shown live on Russian TV, Almaz-Antey presented colorful graphs, intricate flow charts, complex diagrams, and the centerpiece: video footage from an experiment in which the weapons manufacturer blew up an airliner on the ground in what it said was an attempt to gauge blast trajectories.

These elaborate images were soon circulating widely on Russian TV, coupled with the news anchors’ solemn description of the arms maker’s central claim.

“The Malaysian Boeing was shot out of the skies of Donbas by a rocket that Russia no longer has, but which Ukraine does have, ” an afternoon presenter on state TV declared, citing Almaz-Antey.

Almaz-Antey, which is among Russian companies hit with Western sanctions over Moscow’s interference in Ukraine, claimed its findings showed that if a Buk missile brought MH17 down, it must have been fired not from the area indicated by the Dutch report, which includes the town of Snizhne, but from a spot near the village of Zaroshchenske.

“The version of the Western analysts does not hold water, while the village of Zaroshchenske was under the control of Ukrainian forces at the moment of the air disaster, and that is proved. If the rocket flew from Snizhne, there would have been a complete attack line and damage pattern, ” the Vesti presenter said.

“The Boeing was shot down by a missile that Russia doesn’t have, ” Komsomolskaya Pravda, Russia’s most widely read paper, said in a front-page headline accompanied by a photo of the jet’s wreckage.

Footage of a fuselage exploding in the Almaz-Antey experiment was aired widely in the Russian media and differed starkly from the scene in the Netherlands. Reporters there waited in a hushed room before the battered, reassembled shards of the downed jet’s front section -- where the Dutch Safety Board said the pilots were killed instantly by the missile’s powerful blast.

The gulf between the Dutch board’s findings and those released by Almaz-Antey was also broad. Russian media outlets seemed determined to defend the missile maker’s claims, which were dismissed by IHS Jane’s Defence Weekly, a respected British analytical organization, as “disinformation and propaganda aimed at drawing attention away from the Dutch report.”

Instead of accentuating the differences, they portrayed the Dutch Safety Board’s report as buttressing Almaz-Antey’s findings.

“The Netherlands have said Ukraine should have closed its airspace, ” a state TV report said.

The media frenzy came against a backdrop of official Russian criticism of the Dutch report, which the Deputy Foreign Minister Sergei Ryabkov asserted was the “biased” result of “obvious attempts to carry out a political order.”

Putin, meanwhile, did his best to distance himself from the tragedy of MH17, which Malaysia’s government said was shot down by “trigger-happy criminals” who must be brought to justice.

Receiving lavish coverage from the Russian media as always, Putin focused on issues such as the economy and the war in Syria in remarks at the Russia Calling! conference and other events.

He painted the United States and the West in a poor light, accusing them of failing to cooperate on the Syria crisis.

Along with its statements about the possible site of a launch, one of Almaz-Antey’s chief claims is that if the jet was downed by a missile, it was a type that the Russian military no longer uses.

But while the Dutch board said that MH17 could not have been hit by a meteorite or shot down by a warplane, Russian officials and media outlets did nothing to withdraw or debunk some of the more outlandish theories or claims they have put forth since the jet was downed.

“So is there also still the version offered by official Russian news channels that the plane was full of…corpses specially sent there and blown up by the CIA?” Dmitry Muratov, chief editor of independent Russian newspaper Novaya Gazeta,  asked ironically.

Russia’s Investigative Committee, meanwhile, is still officially conducting a criminal investigation into the possibility, dismissed in the West as pure fantasy, that MH17 was shot down by a Ukrainian fighter jet.