Crimean Tatar Memorial to Victims of the Deportation desecrated 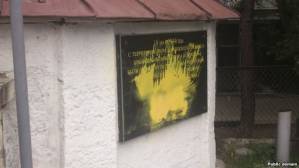 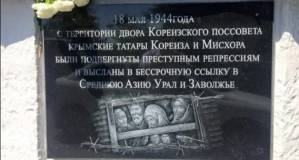 The memorial plaque can be seen on the right.

A memorial plaque in memory of the Victims of the 1944 Deportation in the settlement of Koreiz has been vandalized.  Local residents told the Radio Svoboda Crimean Service that they had discovered the plaque covered in yellow paint at around 9 a.m. on Oct 21.  There were municipal services workers standing there, ready to wash off the paint, and a witness believes that they were hoping to cover up the incident.

The local residents refused to accept this and insisted that the police be called. The latter arrived and recorded the incident.  Whether a criminal investigation is initiated remains to be seen.

Acts of vandalism directed at Crimean Tatar places of importance happen regularly, with the de facto authorities in no hurry to investigate.  The Crimean Tatar Qurultay reports that those responsible for arson attacks on mosques in Crimea over the past two years have still not been found. Eskender Bariev, Coordinator of the Crimean Tatar Rights Group reported back on July 25 that vandals had destroyed a gravestone in the township of Otuz (Shchebetovka)   The police had refused to accept the report of the vandalism, saying that it wasn’t within the jurisdiction of the Shchebetovka Council.

It would certainly not be true to say that the police before Russia annexed Crimea were much more proactive in fighting vandalism directed at Crimean Tatar places of significance,   however the attacks are now coming at a time when Crimean Tatars are generally experiencing serious infringements of their rights under the occupation regime.

Within months of occupation, Crimean Tatar leaders Mustafa Dzhemiliev and Refat Chubarov had been banned from their homeland.  Akhtem Chiygoz, the Deputy Head of the Mejlis or Crimean Tatar representative assembly has been imprisoned since January in a legally absurd case which is specifically targeting Crimean Tatars.

On May 18, 2014, the seventieth anniversary of the 1944 Deportation of the entire Crimean Tatar People from their homeland, the occupation regime tried to ban remembrance gatherings altogether, then this year there were heavy-handed measures taken and detentions of Crimean Tatars taking part in a traditional car procession across Crimea.