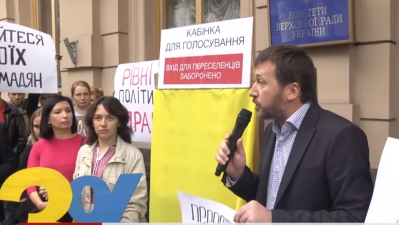 Picket demanding that parliament pass a law enabling those forced to leave their homes to vote.  One of the placards says: "Do not be afraid of your own citizens"

In a vital, but belated victory, Crimean Yakiv Vityuk has won the right to vote in Ukraine’s local elections on Sunday.  Up to one and a half million other Ukrainians  have, however, been denied this constitutionally guaranteed right.

“On the one hand, I’m proud that I succeeded, in spite of everything, to achieve equal rights for myself.  On the other hand, it’s very sad that I had to obtain equal rights with all other Ukrainian citizens in such a difficult way.”, Vityuk said at a press conference on Oct 23.

According to Natalya Tselovalnychenko from the Luhansk Human Rights Group, 10 identical applications were lodged, with Vityuk’s the only one that was successful.  The absurdity is seen, for example, in the fact that Vityuk’s wife, who submitted exactly the same papers and has identical circumstances, will not be able to vote on Sunday.

Tselovalnychenko calls the situation discriminatory and a flagrant violation of people’s rights.  She warns that it is likely to lead to the election results being challenged.

The fact that one person’s right to vote has been upheld accentuates the absurdity of the current situation which has effectively disenfranchised one and a half million Ukrainian citizens, forced by Russian aggression and war from their homes.

The issue is not entirely unequivocal.  While organizations defending the rights of ‘internally displaced people’ [IDP], as well as the election watchdog OPORA have consistently – and unsuccessfully - called for a change to the law on local elections,  the Committee of Voters of Ukraine [CVU] has come out opposing any change.

The CVU position is that it is entirely constitutional that displaced persons should not be voting at the local elections since voters can only vote once, and there are supposed to be elections in areas under Kremlin-backed militant control early next year.  The head of the CVU explained their stand to Deutsche Welle’s Ukrainian Service:

“At the moment people from Donetsk and Alchevsk would vote in Kyiv, Lviv, Kharkiv for the local authorities where they are temporarily living. After the Minsk and Paris Accords begin being implemented, they will return home and will again elect the local authorities in their region.  That is incorrect”.

That position has been fiercely disputed by many organizations working for IDP, as well as individuals, including the many rights activists who are themselves now exiled.

Neither Minsk nor the Paris Accords even touched on Russian-occupied Crimea, meaning that those banished, forced to flee or who left after Russia’s invasion, are not likely to have another chance to cast their vote in the near future.

Of those who left Donbas, few see a future for themselves back there while the area remains under militant control.  Many experienced captivity, torture or harassment before leaving, and those with a strongly pro-Ukrainian position have well-founded concerns about their safety should they return.

Most analysts are also highly sceptical of the commitments wrenched out of the militants to organize elections in accordance with Ukrainian legislation.  This should entail freedom for anybody to stand for office; full media freedom; freedom of assembly, etc.  Nothing over the last 18 months has given any reason to expect this, and many question whether the elections will ever take place, and most certainly whether displaced people would be able to safely return and vote in them.

The July 14 law on local elections states that the territorial community according to which a person votes is determined by their registered place of residence.  Proof of this registration is provided by their internal passport or a temporary document confirming their Ukrainian citizenship.  IDP who are living in another place and who have a document confirming their status as displaced persons, but no stamp in their passport about the corresponding registration will simply not be able to vote in the local elections.

There was strong protest from civic groups and calls on President Petro Poroshenko to veto the bill.  He did not, although he, and many international observers stressed the need to allow displaced people to vote.

Three draft bills were tabled in parliament which would have enabled displaced Ukrainians to vote, yet not one was put on the agenda.  Nor is this only an issue involving people who have left areas under militant control.  It was left to the Central Election Commission to decide whether elections could be held in some parts of Donbas near occupied areas where shelling, for example, could put voters’ lives in danger.  Whether because they’re on occupied territory or in areas deemed unsafe, in the Donetsk oblast only 42% of Ukrainians will be able to vote; in the Luhansk oblast only 26%.

Article 70 of Ukraine’s Constitution clearly stipulates that only people under the age of 18, non-Ukrainian citizens or people who are mentally unfit are denied the right to vote.