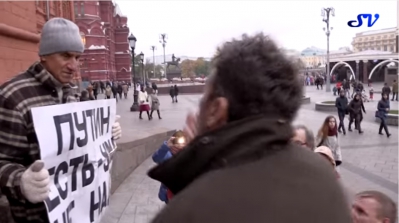 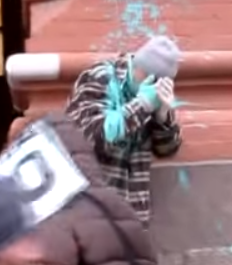 The members of two pro-Kremlin organizations [NOD and SERB] who attacked an elderly pensioner holding a single-person picket outside the History Museum in Moscow on Oct 24 threatened to do the same to “all those who insult Putin, insult Russia”.

Seconds later Ionov was doused first in green paint, then with some kind of chemical cleaning substance which got into and burned his eye.  The assailants must have been aware they were attacking somebody old enough to be their grandfather.

All of this was recorded on a video by Alexandra Ageeva.  You can see activist Maria Ryabikova leaping in to defend Ionov, and being pushed away.  They move away as the banner is grabbed and ripped to pieces, while others take photos with their phones.

No police officers came even close.  It is quite likely, however, that they would have been there immediately had any other people tried to defend Ionov, since that would have provided an excuse to accuse Ionov and others of holding an ‘unauthorized gathering’.

Ionov’s trial is currently underway on surreal and disturbing charges.  He is the first of four people so far to be tried under a new article of the Criminal Code which envisages up to 5-year sentences if a court has issued three rulings on administrative offences within 180 days.  It is quite standard in today’s Russia for police to detain people at entirely peaceful protests, with administrative protocols then drawn up and processed by the courts with no questions asked.   Three such unwarranted administrative penalties can now lead to criminal prosecution.