So will anybody answer for the non-election fiasco in Mariupol? 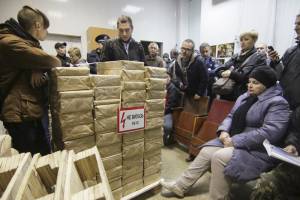 The ballot papers that never had a chance of reaching the ballot box [Photo: EPA]

The head of the OPORA election watchdog warns that the elections sabotaged in Mariupol and Krasnoarmiysk on Sunday cannot be repeated before the New Year. Who was to blame should be the subject of a criminal investigation.

OPORA has reported a surreal sequel to the squalid sabotage of the local elections in Mariupol.  According to the OPORA and Committee of Voters of Ukraine [CVU] representative, the Mariupol election commission gathered at 20.00 and accepted the oaths given by two replacement members.  With 16 members present, they formally acknowledged that:

1.     The voting papers had not been given to the precinct electoral commissions;

2.     The elections in Mariupol had not taken place

The disruption to the elections, both in Mariupol and in Krasnoarmiysk, had been predicted.  It is less clear whether it could have been prevented.  The signs of trouble had been present for some time, yet just a few days ago OPORA stated that it saw no reason for the elections not to be held.

Commentator Adrian Karatnycky from the Atlantic Council was scathing about the mess. He wrote that “weeks of manipulations and scandalously irresponsible behaviour by affiliates of Ukraine’s ruling parties in the Donbas, has disenfranchised the voters of Mariupol and Krasnoarmiysk.”.  He attributed a fair share of the blame to the Donetsk governor Pavlo Zhebrivsky, asserting that he had been trying for weeks to disrupt the vote.

Mykhailo Okhendovsky, Head of the Central Election Commission, is reported to have approached the police and suggested that the actions of some members of the Mariupol Territorial Election Commission [TEC] bear the hallmarks of obstruction of the electoral process (Article 157 of the Criminal Code).

The previous night at the printing company responsible for the ballot papers, the TEC passed a decision to declare the papers invalid and to block them from being delivered to polling stations.

The Deutsche Welle Ukrainian Service notes that the scandals over the TEC began two weeks ago, with the members changed three times, and the chair replaced twice.

Members of the TEC worked without the proper documents and candidates were not issued with ID.  Serhiy Zakharov, the Donetsk artist twice held hostage by Kremlin-backed militants and now candidate for mayor of Mariupol, drew his own ID document in order to demonstrate how the law was being infringed even in such details as ID.

There are conflicting stories about 22 ballot papers which either had the same party on the list twice, or had been opened.  Whatever the fault, it was with 22 papers only, yet was was used to block all ballot papers leaving the press.

Members of the TEC spent the night at the printing press, with staff also forced to stay there with them.

The polling stations even opened, only to close again for want of ballot papers.

In Krasnoarmiysk they never opened with the district administrative court having declared the ballot papers to be invalid.  The chair of the TEC apparently resigned in protest and the voting did not take place.

The elections were also declared invalid by the Svatovo TEC [Luhansk oblast] which, according to OPORA, stated that mistakes in printing the ballot papers had been through the fault of members of the TEC.

A representative of the Petro Poroshenko Bloc stated on Sunday that the elections in Lisichansk had been declared invalid, although as of the early hours of Monday morning, there was no confirmation of this from either OPORA or CVU.

The apparent sabotage, at least in Mariupol and Krasnoarmiysk, comes at a time when large numbers of Ukrainians from Donbas were unable to vote.  Some are in areas under Kremlin-backed militant control, or areas adjacent deemed too dangerous to hold elections, but up to 1.5 million Ukrainians, forced to leave their homes in Donbas or Crimea were effectively disenfranchised through the local elections law.

She dismisses statements that elections could be scheduled to coincide with the second round of voting, and believes it unlikely that they will be held before the New Year.

How long it will take to identify those responsible for criminal obstruction to the electoral process is even less clear, or, unfortunately, whether anybody will be held accountable.