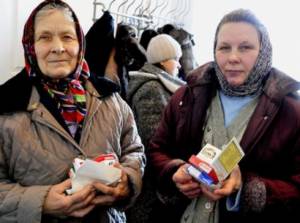 Almost exactly a month after the so-called ‘Luhansk people’s republic’ [‘LNR’] ordered all but one western aid organization to leave the Luhansk oblast, the self-proclaimed ‘Donetsk people’s republic’ [‘DNR’] has thrown out Médecins Sans Frontières (MSF) and refused to allow UN agencies such as the World Food Programme to work on ‘DNR’-controlled territory.  There is also news, thus far reported only in the state-controlled Russian media that ‘LNR’ has asked to representatives of the OSCE Monitoring Mission to leave territory under its control.

The militants used the same allegations against MSF as did their Luhansk counterparts, and even provide a photo of a supposed protest similar to those staged in Luhansk.  They do, however, add some allegations, though if they hoped that the quantity would add credibility, they were seriously mistaken.  The official ‘explanation’ on Oct 25 claims that the Nobel prize-winning NGO was banned “because of its participation in gathering defence date and illegal supplies of psychotropic substances”.  They are also alleged to have carried out “psychological training among the population of front-line regions knowingly causing social disorientation. “.

MSF has warned that this is leaving thousands of people without healthcare.  Its statement says that they were told to leave on Oct 19, without being given any reason why, and ask the ‘DNR Humanitarian Committee’ to reconsider this move without delay.

"We are almost the only organization providing treatment for tuberculosis in prisons, insulin for diabetic patients, and hemodialysis products to treat kidney failure. With the termination of our activities from one day to the next, thousands of patients suffering from chronic, potentially fatal diseases will now be left with little or no assistance."

The ban on UN humanitarian aid was claimed by militant leader Denis Pushilin to be “due to their refusal to correctly fill in the relevant documents.”  Pushilin asserted that the UN organizations “want us to redo all our laws and documentation”.  They sought to use the term ‘register’, not ‘give accreditation’, and to use forms with the Ukrainian emblem on them.  He says that the International Red Cross Committee used the ‘DNR’ forms and immediately received accreditation.

These are the excuses provided for exacerbating an already grave humanitarian crisis in Donbas just as winter is approaching.

UN officials reported on Sept 24 that the ‘LNR’ de facto authorities had ordered all UN agencies in Luhansk to get out by the following day.  This followed the rejection of applications from all UN agencies and international NGOs, except the Red Cross,  to work in the area.  The Red Cross was untouched by the bans, yet its humanitarian convoy was forced to return on Sept 25 without being allowed to enter militant-controlled areas.

Calls then for “everyone with influence over the de facto authorities” were ignored in Moscow and the bans remain in place.

Both in ‘LNR’ and ‘DNR’ there have also been orchestrated protests against the OSCE Monitoring Mission, and the report on Oct 26 that two officials had been expelled is disturbing.

The militants are supposed to be holding elections ‘according to Ukrainian law’ and to OSCE standards in April 2016.  The latest, aggressively anti-Ukrainian statements from militant leaders and deliberate exaggeration of the failings of Sunday’s local elections make optimism on that score difficult, but so too do efforts to expel international organizations in advance, regardless of the devastating humanitarian cost.