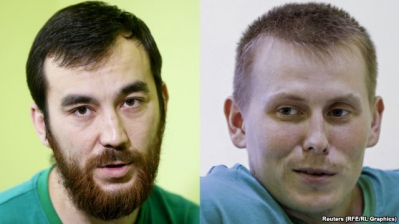 One of the two Russian spetsnaz officers captured in eastern Ukraine in May this year is now denying that he was a serving Russian officer, and the other, whose family has just hired a different lawyer, may be planning to do the same.   Any claim now that they were pressured by the Ukrainian authorities into giving a different account fails to explain why they freely gave the same story to OSCE representatives, a Russian journalist and to a member of Russian President Vladimir Putin’s Human Rights Council.

The two men – Aleksander Aleksandrov and Yefgeny Yerofeyev were captured on May 16 near Shchastya in the Luhansk oblast.   Both were injured and Aleksandrov has undergone a serious operation which, according to the doctors, enabled them to save his leg.  They were held in a military hospital before being transferred to a SIZO or remand prison.  Their trial on charges of terrorism is to be held in the Holosiyivsky District Court in Kyiv, though no specific date appears to have been set. .

Russia’s Defence Ministry, after initial silence, claimed that the men had left the military at the end of December 2014.   The position that at least Yerofeyev has now taken – that he had left the Russian military, and was working as a free agent for the so-called ‘Luhansk people’s republic’ [’LNR’] militia, was that pushed by Moscow, but denied by both men.  Western reports are inclined to report only Kyiv’s assertion, and Moscow’s counter-claim, however the men’s story was clearly expressed not only in the taped questioning by Ukraine’s Security Service.

They were visited in hospital on May 20 by representatives of the OSCE Monitoring Mission who point out that they spoke to them “without the presence of Ukrainian authorities”.

Sergei Krivenko, a well-known Russian human rights activist and member of the Human Rights Council, then spoke with them on June 1.  In his report on the visit, he stated that Sergeant Aleksandrov and Captain Yerofeyev had denied Russia’s claim that they were no longer in military service and had asked for help in contacting their families as all phone numbers that they had were either blocked, or didn’t answer.

He wrote that their conditions were good, and that both men categorically denied that they had been subjected to any form of torture or physical pressure, as had been claimed by Russian television.  Their main concern, he said, was that they were being prevented from contacting their families, and they were asking Krivenko and the Human Rights Council to help.

Pavel Kanygin from the Russian independent newspaper Novaya Gazeta first spoke to the men on May 22, then visited them again at the end of the month.  On the earlier occasion, he specifically mentions that he visited them after OSCE, the Red Cross, psychologists and a lawyer, and that he was able to talk to them one to one.  They expressed the same concern as to Krivenko, and in Kanygin’s presence tried yet again to contact their families.  Aleksandrov was also devastated by an interview which his wife gave to TV Rosssiya 24 in which she repeated the Defence Ministry’s line.

All of this was similar to other cases seen, for example, in Pskov last year, where the families of young soldiers killed in Ukraine were placed under heavy pressure to not talk to the press or even to pretend that the person is still alive.

Later in the summer Kanygin actually visited Aleksandrov’s parents, who were initially antagonistic, accusing him of working for Ukraine and the USA, but then mellowed, and were grateful for the contact, albeit via an intermediary, with their son.

Russian human rights activist Zoya Svetova reported in the summer that 73-year-old Yury Soloshenko had finally been allowed to see the Ukrainian consul after being held incommunicado for almost a year.  This was as part of a deal because Moscow now needed access to the two Russians captured during a battle on Ukrainian territory.

It was around that time that Yerofeyev was reported to have changed his stand completely.

Now Kanygin has published a new interview, this time with Konstantin Kravchuk, the Ukrainian lawyer provided by Kyiv and up till now representing Aleksandrov.  Kravchuk has just lodged an application with the European Court of Human Rights, asserting that Aleksandrov should not have been transferred to a SIZO after the two months in hospital.  He will continue on that application, but says that Aleksandrov’s family has hired a private lawyer Yury Hrabovsky. Asked how this will change the line of defence, Kravchuk points out that Yerofeyev is now denying all testimony given before, asserting that it was given under duress. “At the trial Yerofeyev will probably say that he is a member of the ‘LNR’ people’s militia.  And there is a suspicion that Aleksandrov with this new lawyer will take the same line.”  This, he notes, will mean that the two men will be charged with terrorism and face life sentences.

Kravchuk believes that the two men are convinced that whatever they say, they will be part of an exchange, and that this line will kill two birds with one stone: they’ll drag the trial out until that exchange can be organized, and will take the line demanded by Moscow.

It is certainly easy to understand the men’s dilemma.  They want to return to their families, and cannot expect to be patted on the head for emphatically asserting a position that Russia has so adamantly, if with little credibility, denied.

Kravchuk himself rubbishes the video where the men are being questioned, saying that nobody would take the testimony of a person with a serious gunshot wound in a near comatose state seriously.

This may well be true of the first few days, and indeed, as he suggests, there would be scepticism if the only testimony were on a video recorded by the Security Service.  As noted above, this is not the case here.

Ukraine’s SBU, according to Kanygin, calls Yerofeyev’s lawyer Oksana Sokolovskaya an “agent of the Kremlin”.

Whatever the reasons, Yerofeyev is now insisting that he gave testimony “under threats to his life”.  It remains to be seen what Aleksandrov with the new lawyer does.

Kravchuk;s position is to remain silent throughout, and let the investigators dig themselves into a hole.  He fairly openly suggests that all the publicity here, and in the case of Nadiya Savchenko have actually impeded a swift exchange.  He hints that Russian Major Vladimir Starkov who was caught with a truckload of ammunition and sentenced to 14 years may have already been exchanged.

The story with rumours about an exchange remains unclear, as of course, are any behind the scenes negotiations.   Russia is currently holding at least 11 Ukrainians prisoner on overtly trumped up charges, and the priority must be to obtain their release.  It is completely clear why Russia, via the consul and through other means, would have been pushing for the two intelligence officers to say that they were fighting on the militants’ side on their own initiative.  It is much less obvious, if they both take this line, why they should assume that Russia would get them home.  Their experience so far, and that of other young men sent to fight in Donbas, makes any illusions difficult.