8 years for a demonstration if you’re Crimean Tatar 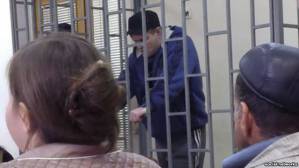 Three Ukrainian citizens are in detention in Russian-occupied Crimea in a legally absurd prosecution which is openly targeting only Crimean Tatars.   The prosecution over participation in a pre-annexation demonstration has resulted in constant searches, interrogations, and detentions - always of Crimean Tatars, although by no means only Crimean Tatars took part in the protest outside the Crimean parliament on Feb 26, 2014.

The main target is doubtless Akhtem Chiygoz, Deputy Head of the Mejlis or Crimean Tatar representative assembly, but the ongoing detention of Ali Asanov and Mustafa Degermendzhy is also of immense concern.

The detention of Ali Asanov and treatment of his family are particularly brutal.  Asanov is 33 and a father of four very small children.  The youngest was born in June two months after Asanov was first remanded in custody.  He was first arrested on April 15 and remanded in custody for two months, the judge totally ignoring the fact that Asanov’s wife was in her seventh month and the couple have three other children.  All courts since have upheld or extended that detention, with the Supreme Court on Oct 26 upholding his detention until at least Nov 19.

Asanov’s wife Elnara was at court on Oct 26, with her two eldest children, Ali’s father, other relatives and activists of the Crimean Tatar movement.  Asanov, brought in wearing handcuffs and forced to stand in a cage, was able only to see his children, with his daughter crying “Babaka [“Daddy”] as he was taken into the courtroom.  Elnara asked that the children be allowed in too, so that they could at least say a couple of words to their father, but the female prosecutor was implacable.

Judge Vladimir Bondarev repeated the line presented by the prosecution, that the charges could carry a sentence up to 8 years and that “Asanov is a citizen of another state”, i.e. Ukraine and therefore, he claimed, could flee, leaving his wife, small children and his elderly father who is in ill health.

Asanov’s lawyer Alexander Katelin is scathing of the arguments used.  The prosecutor keeps claiming that Asanov could abscond, try to influence the case (how?), without providing any documentary evidence to back this.  The reference to Asanov’s Ukrainian nationality is absurd, he says – 90% of Crimeans have the same. The so-called ‘investigation’ into the case has finished, meaning that there is nothing that Asanov could even theoretically try to influence.

Bondarev asked Asanov “how he assesses his attitude to what was done”.  Asanov replied that he did not deny that he was at the meeting, but that he had not hit anybody and had not taken part in mass riots.  “I’ve read the case material, and there is no proof there, and nowhere is it show that there were mass riots”.

The judge returned to reject the appeal and state that “you will have to be in the remand prison until the verdict, and only after the court – I somehow can’t believe that with an attitude like yours, you will be freed.”

What kind of ‘attitude’?

Asanov and his family have reported from the outset that he was clearly told that he would be freed if he denounced Chiygoz.  Asanov has clearly refused to oblige, and it is difficult not to suspect that he and his family are being made to suffer for his courage in refusing to give entirely false testimony.

Testimony about a demonstration that happened before annexation and under Ukrainian law, meaning that the prosecution is in itself unlawful.  According to Russia’s Criminal Code (Article 12 § 3), a criminal prosecution can only be initiated against foreign nationals who committed an offence on the territory of another country if “the crime was directed against the interests of the Russian Federation or a citizen of the Russian Federation.”

Russian-occupied Crimea would have no jurisdiction to prosecute, even if there were offences.

There are not.  On Feb 26, 2014, there was a demonstration of around 10 thousand Crimean Tatars and Maidan supporters who gathered outside the parliament building in Simferopol because they feared plans were underway to push through a bill changing Crimea’s status.  They were opposed by a smaller number of pro-Russian demonstrators led by Sergei Aksyonov, then the leader of a marginal pro-Russian party in the Crimean parliament.  Aksyonov was installed as self-proclaimed leader on Feb 27 after Russian soldiers seized control.

There is nothing to indicate that only Crimean Tatars were responsible for any conflict that day, or for the two deaths, yet only they have been targeted.