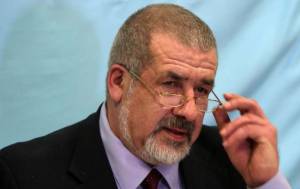 After invading and annexing Crimea and banning Crimean Tatar leader Refat Chubarov from his homeland, Russia now wants to remand him in custody – after ‘extraditing’ him, of course. It accuses him of – wait for it – “encroaching on Russia’s territorial integrity” by insisting that Crimea is Ukraine.

Refat Chubarov is the Head of the Mejlis, or Crimean Tatar representative assembly, an elective body which Russia is now threatening to ban as ‘extremist’.  Taking advantage of the latest propaganda drive aimed at justifying Russia’s military intervention in Syria, there have even been totally unsubstantiated allegations that members of the Mejlis are recruiting fighters for the so-called Islamic State.  These new attacks are especially lacking in credibility given that Russia’s offensive against the Mejlis began well over a year ago.

The veteran Crimean Tatar leader and former Head of the Mejlis Mustafa Dzhemiliev was the first to be exiled from his native Crimea, on the eve of the 70th anniversary of the Deportation of the entire Crimean Tatar People when he was just 6 months old.  Chubarov was warned against ‘extremism’ over peaceful protest against that ban, then in July himself banned from Crimea.   The armed offensive against the Mejlis as a body began in September 2014, and then in January the Deputy Head of the Mejlis, Akhtem Chiygoz was detained on legally absurd charges.  He remains in detention, together with two other Crimean Tatars.  Grave violations of Crimean Tatar rights under Russian occupation have been reported by numerous international NGOs and European structures.

In response to the ever-worsening situation for Crimean Tatars and other Ukrainians in Russian-occupied Crimea, Dzhemiliev, Chubarov and other prominent Crimean Tatar leaders initiated a blockade of the ‘border’ between mainland Ukraine and Crimea.  Mustafa Dzhemiliev stressed that the situation is unheard of where a country whose territory has been occupied by an aggressor state continues to provide the occupied territory with food, electricity, etc.,  The blockade, preventing trucks from entering Crimea, has been in force since Sept 20.  The occupation authorities and Russia have consistently denied that it is having any effect.  This clashes with reports coming from Crimea, and also with the heightened attack on the Mejlis and on prominent Crimean Tatar figures.

As reported, it was Natalya Poklonskaya, the de facto Crimean prosecutor who announced on May 29 that Russia’s FSB [Security Service] had initiated criminal proceedings against Chubarov under Article 280.1 of the Russian Criminal Code (public calls to action aimed at violating the territorial integrity of the Russian Federation).  According to the document which Chubarov has now received, he is in fact charged under 280.1 § 2.  – where such calls are published in the media or Internet, with this carrying a longer sentence.   This article was introduced in May 2014, and there was concern from the outset that Russia would use it to stifle opposition to its occupation of Crimea.

Poklonskaya said that the ‘investigators’ would take procedural decisions with respect to citizen Chubarov”, adding that he had been placed on the wanted list.  “We are waiting for him”, she added, almost a year after Russia banned the Mejlis leader from his homeland.

That ban was for 5 years which is the same maximum term envisaged for the charges under which Russia wants to charge him.

Chubarov has now posted the ruling from a Simferopol court on Oct 6, 2015, which orders his detention for 2 months with this to commence “from the moment of his extradition to the territory of the Russian Federation or his actual detention on the territory of the Russian Federation”.   The ruling is based on an application from the Crimean branch of Russia’s Investigative Committee.

Chubarov gives the charges in full, then notes that “in this way, the Russian Federation, having occupied Crimea, qualifies my actions as a Ukrainian citizen, trying through all legal means and action to achieve the end to Crimea’s occupation, as criminal”.   After listing the procedural irregularities of this new ‘criminal case, ’, Chubarov informs that all the documents will be sent to the European Court of Human Rights with which he has lodged an application against the Russian Federation.

Worth noting that back in May,  Eskender Bariev, head of the Crimean Tatar Rights Committee saw these criminal charges as yet another step towards banning the Mejlis and a method of intimidation and pressure on Crimean Tatar activists.

There is no chance that Refat Chubarov will be extradited to Russia or Russian-occupied Crimea.  However grotesque these new ‘charges’ may seem, Russia’s lawless behaviour over the last 18 months unfortunately give no grounds for dismissing them as comical sabre-rattling. 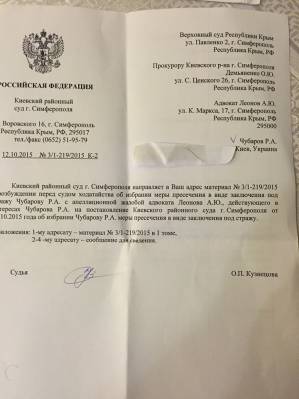 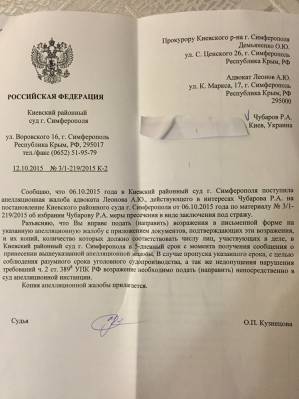