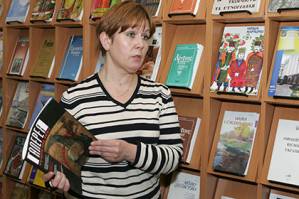 Natalya Sharina, Director of the Ukrainian Literature Library in Moscow, has been detained for 48 hours, and the Investigative Committee is seeking to have her remanded in custody on new charges of ‘inciting hatred’ over books found during Wednesday’s armed search of the library  (see end for updated information)

On Wednesday morning, Oct 28, armed and masked OMON police officers carried out searches of the Ukrainian Literature Library in Moscow and the homes both of Natalya Sharina and of the head of the Association of Ukrainians in Russia.  They appear to have been on the hunt for so-called ‘extremist’ material and took away material, memory sticks and some documents.

It was first reported that Valery Semenenko, head of the Association of Ukrainians in Russia and a member of the World Congress of Ukrainians, had been detained.  He explained to Radio Svoboda that men in masks with machine guns had turned up at his home and unceremoniously carried out a search, removing computers, laptops, memory sticks and a large amount of literature. He was then taken away for questioning, but released.

A criminal investigation was initiated against the Library and Natalya Sharina at the end of 2010.  The charges were of inciting hatred (Article 282 of the Russian Criminal Code) with the library accused of circulating anti-Russian books.  The investigation was terminated in August 2011 for want of a crime.

It has now been reinstated, with the investigators reportedly saying that this is “due to a change in the political situation”.

Russia’s Sova Centre has condemned the reinstatement of the criminal proceedings.   “A library is designed for storing printed material, not for propaganda of the ideas expressed in such material.  The point of its existence is to provide researchers and those simply interested with access to a whole range of Ukrainian thought.  We would furthermore point out that according to the Library Code, a library is obliged to hold all incoming material.”

During the day Natalya Sharina told UNIAN’s correspondent in Moscow that her flat had been searched and several books removed.  Among them was a book on Holodomor 1932-33 [the manmade Famine in Ukraine]; a book by Oksana Zabuzkho, several copies of a newspaper from 2011, office equipment and electronic storage devices.   She understood the search to be linked with the 2010 criminal investigation and said that the investigators had stated that they wanted to get “additional material”.

She added that they had found no ‘prohibited literature’ in the library, but had removed books about the Ukrainian nationalist Stepan Bandera and the Organization of Ukrainian Nationalists ‘- Ukrainian Insurgent Army,   Not one of the books removed, she said, was on Russia’s very large list of ‘extremist materials’.

REN-TV  reported that the police were looking for copies of “Chas Rukhu” where supposedly there was “Russophobic distortion of historical facts”.   REN-TV points out that one of the leading authors of this publication is Boris Tarasyuk, a former Ukrainian Foreign Minister and deputy leader of Yulya Tymoshenko’s Batkivshchyna faction.

In January this year, the director of a library in Russian-occupied Crimea was fined for supposedly holding ‘extremist material’, in the form of 12 books about Holodomor.  The specific book published in 2007 by Vasyl Marochko under the title ‘Genocide of Ukrainians’: Holodomor 1932/1933’ is on Russia’s Federal List of Extremist Material (no. 1154).  The Feodosiya Prosecutor claimed that the book had “an anti-Russian orientation” and used language “aimed at inciting inter-ethnic enmity on the basis of belonging to a particular social group.”

According to the Sova Centre, the book by Marochko had been removed together with other material during a search of the Ukrainian Literature Library at the beginning of 2011.  Although the investigation was then stopped, a number of books were added to the federal list of banned material which then contained just 1271 works, and as of Oct 28, 2015 holds 3, 113 items.  The books deemed ‘extremist’ included publications about Holodomor as an act of genocide of the Ukrainian people, as well as material about the crimes of the NKVD, Stepan Bandera, etc.   They were all placed on the Federal List on the basis of a ruling of the Meshchansky District Court in Moscow from 01.12.2011.

There is also a Federal List of Extremists and Terrorists which includes, for example, Rafis Kashapov, sentenced to 3 years imprisonment for posts critical of Russian President Vladimir Putin, Russia’s annexation of Crimea, etc.; Alexander Byvshev, the Russian poet convicted of ‘inciting enmity’ and sentenced to 300 hours of community service for a poem expressing opposition to Russia’s annexation of Crimea and, more recently, Yekaterina Vologzhenova who is on trial for sharing material criticizing Russia’s actions in Ukraine on social networks.   That list currently holds over 4, 500 names.

Now Russia is targeting the director of a literature library, as well as the library itself, for allegedly ’inciting hatred’ by doing what libraries do – holding books.

Update: Russia’s Investigative Committee has announced that it is asking the court to remand 58-year-old Natalya Sharina in custody on charges of ‘inciting national enmity or hatred, and also denigrating human dignity.  They assert that between 2011-2015, Sharina, as Director of the Ukrainian Literature Library, “circulated among visitors books by Dmytro Korchynsky designated by the court as extremist material and prohibited for use”.   The announcement goes on to mention that in the course of their search of the library, they removed printed matter which they assert contained “calls to anti-Russian state and anti-Russian propaganda”.

The charges are thus identical to those initiated in 2010, but the search by men in machine guns clearly uncovered a couple of books which they are using to remand a librarian in custody.  Korchynsky, leader of the ‘Bratsvo’ Party, was reported by Anton Shekhovtsov, a well-known expert on right-wing movements as “widely considered an agent provocateur” whose party has taken place in several actions intended to provoke police suppression of peaceful protest. He is also said to have taken part in a court at an explicitly pro-Putin summer camp in Russia.