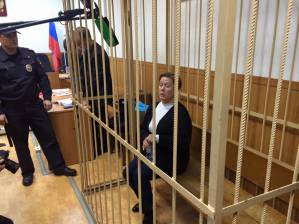 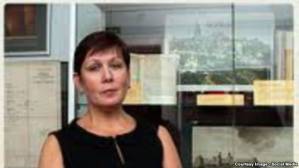 Update:  The Taganka Court in Moscow has ordered that Natalya Sharina, Director of the Ukrainian Literature Library be placed under house arrest for two months.  Even the prosecutor had asked only for a signed undertaking to not leave Moscow, so the judge was presumably loath to buck Russia’s Investigative Committee which had asked for the 58-year-old to be remanded in custody. Natalya Sharina had needed medical care at least 3 times because of dangerously high blood pressure.

She denies all charges and says – as have others – that the books supposedly found were planted.

On Oct 29, while some Muscovites gathered on Lubyanka Square to remember by name victims of the 1937 Terror, a 58-year-old librarian was spending her second day in custody, without food or water, and facing interrogation, including at night, over books allegedly held in the library.  They were books alleged to be ‘anti-Russian’ in a country where, as journalist Vitaly Portnikov comments, you can go into any bookshop and find numerous works that are “openly fascist, xenophobic, chauvinistic, anti-Ukrainian, anti-Semitic or racist.”

As reported, on Wednesday morning, armed OMON police officers carried out searches of the Ukrainian Literature Library, Sharina’s home, as well as that of the Head of the Association of Ukrainians of Russia, Valery Semenenko.  Sharina was detained and has been in custody ever since, with a court on Friday due to decide on an application from Russia’s Investigative Committee [ICRF] to remand her in custody.

The ICRF reported on Oct 29 that Natalya Sharina was charged with ‘inciting national enmity or hatred, and also denigrating human dignity” (Article 282 § 2b of the Russian Criminal Code).  The charges can carry a sentence of up to 5 years imprisonment.  ICRF asserts that from 2011-2015, Sharina, as Director of the Ukrainian Literature Library, “circulated among visitors books by Dmytro Korchynsky designated by the court as extremist material and prohibited for use”.  They also supposedly removed printed matter which they assert contained “calls to anti-Russian state and anti-Russian propaganda”.

Vladimir Markin from ICRF seems to be saying that this is not the criminal case from the end of 2010 reinstated, although on Wednesday one of the investigators spoke only of looking for ‘additional material’ and a key ’denunciation’ is from a person who worked at the library under the middle of summer 2010.   Grani.ru suggests that Markin may have been trying to prevent any suggestion that this was the same case.  During one of the searches carried out in Dec 2010 and Jan 2011, Sharina was beaten by a police officer.

This time she was treated in a manner that was gratuitously brutal. According to Yevgeny Smirnov who arrived at the police station to represent Natalya Sharina, she had by then not slept for 30 hours.  During that period she had been through two searches, interrogation as a witness, then interrogation as a suspect.  The 58-year-old had suffered two hypertonic attacks and had very high blood pressure, yet the investigators refused to allow her hospitalization.   She was given neither food nor water, and spent the night on a wooden bench in the Taganka police station.

She was then taken for a face-to-face confrontation with a certain Sergei Sokurov, a former chief librarian at the Ukrainian Literature Library, who gave quite extraordinary testimony against Sharina.  Natalya Sharina appears to have been brought in to the library in 2007, as a non-Ukrainian who doesn’t even know the Ukrainian language, after the latest searches for ‘russophobic’ or seditious material.  According to Sokurov, she was initially distrusted by the Ukrainian community, but this soon passed.  His distrust clearly did not, and it was exacerbated by her unwillingness to let him use the library to present a book he published in 2009.  The book articulates his belief that Ukrainians and Russians must unite as one people and his opposition to what he deems ‘separatism’.  He claims that she held events of an overtly ‘anti-Russian and anti-state nature, and that there were at least 200 ’russophic books’ of which he identified 41 as ’particularly russophobic’.   He suggests that she refused to comply with his demands to remove such  ‘russophobic books’ to please the Ukrainian community and even suggests that this could have been for financial gain.

Another denunciation, however, appears to have been from a local deputy, Dmitry Zakharov who had received ‘a signal’ several days earlier that there was nationalist (literally banderite – from the name of the Ukrainian nationalist leader Stepan Bandera) literature in the library.  Zakharov preferred not to call his approach to the police a denunciation, calling it instead a ‘deputy’s letter’.  “I fight liberal reptiles and Bandera-supporters openly and publicly”, he asserted on his social network page.  And with a report to the authorities.

Tatyana Muntyan, who works in the Library, told UNIAN’s Moscow correspondent that the investigators had planted the book by Korchynsky allegedly found. She says that this book was taken away during the search in 2010 and had not been returned.  It is a particular irony that the book in question is by Dmytro Korchynsky who is fairly widely regarded in Ukraine as a provocateur.  Both he and his organization Bratstvo were suspected of taking part in many protests, including at the beginning of Euromaidan, aimed at provoking a police crackdown.

It is particularly disturbing if the state resorts to planting ‘incriminating material’, however any specific book should not be a problem since this is a library,   where books should be held, regardless of whether we like the views expressed therein.

In a blog entitled “It’s easier to fight libraries than Nazis”, opposition St. Petersburg deputy Boris Vishnevsky calls the charges of ‘extremism’ and ‘russophobia’ against the Director of the Ukrainian Literature Library an example of arbitrary lawlessness.

Even if the book was found and not planted, which he also thinks is questionable, why not just remove the book?   This is especially absurd since “in Russia fascist literature is freely on sale, Nazi newspaper rags are freely published, and pogrom-style Internet sites freely exist without attracting the attention of Russia’s censor Roskomnadzor.  And nobody prosecutes television presenters and politicians inciting hatred to Ukraine on television”.

In Moscow, he points out, they’ve just allowed a ‘Russian march’ “where racism and xenophobia are a common thing.  A brilliant illustration of what the Russian authorities are really fighting.

Of course it’s much easier to fight books by Ukrainian writers and librarians, than Russian Nazis and those who carry out pogroms.

Much more convenient, and much less dangerous”.

If Russia really does go through with this prosecution, Natalya Sharina could face a 5 year prison sentence for holding a book in a library.  This, it transpires, is much more socially dangerous than the behaviour of neo-Nazi Alexei Milchakov, known for beheading puppies and inciting fellow Nazis to kill down-and-outs in St. Petersburg.  In March this year Milchakov returned to his home city after nearly a year of torturing and murdering Ukrainian soldiers as one of the guests at a forum of members of mainly European and Russian far-right and neo-Nazi parties.  He has since become a valued trainer of Donbas militant fighters, teaching even children how to shoot and kill.  Incitement to hatred and violence has proved a positive career boost in today’s Russia.  It all depends whom you hate, of course.