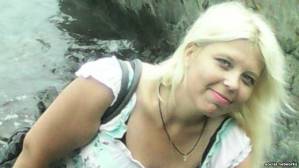 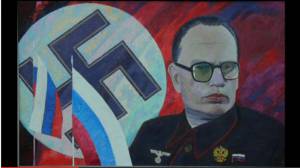 Left: Darya Polyudova; Right: Andrei Vlasov, who went from being a Soviet General to fighting for Hitler used the three colours of the Russian flag as his symbol, prompting Usach’s comment that this can also be considered a ’Nazi symbol’

Two Russian satirists have publicly demanded the immediate release of Darya Polyudova, jailed for 15 days for reposting their video clip, and pointed out that prosecution of anti-fascist activity “constitutes defence of fascism” and is punishable under both Russian and international law.

“Our grandfathers did not fight fascism so that some ignoramus could shame not so much himself, as Russia’s entire legal system by making a mockery of article 20.3 of the Code of Administrative Offences”, Dmitry Vinnik and Yevgeny Glebov stated in the latest edition of their program ‘Orbital Bomber’.

There was, in fact, not one mockery of the law, but two, or two episodes in the increasingly grotesque imitation of ‘countering fascism’ in Vladimir Putin’s Russia.  In both cases there are serious grounds for assuming that the intended ‘offenders’ were first identified, and only then was an ‘offence’ found.

On Sept 22, 2015 a Krasnodar court found anti-fascist activist Yulia Usach guilty of “propaganda and public demonstration of Nazi symbols” (the above-mentioned Article 20.3) for posting historical anti-Nazi cartoons and other satirical images on her VKontakte social network page.  She was ordered to pay a fine of 1, 500 roubles.

At the time the authoritative Sova Centre pointed out that Usach was an anti-fascist and that all of the images she had posted were of a satirical nature and were not aimed at propagandizing Nazism.

The original sentence was upheld at appeal level on Oct 22.  Usach’s lawyer Alexander Popkov recounted how the prosecutor had claimed that the use of a swastika caused suffering to the multi-national Russian people.”  Popkov asked what kind of suffering a picture showing victorious Soviet soldiers hurling Nazi flags onto a pile could cause, with the prosecutor unable to answer.

He might also have been asked why the ‘suffering’ from obviously anti-Nazi images should be of concern to the authorities, but not an international congress of far-right parties in St. Petersburg in March this year, where Holocaust deniers and neo-Nazi sadist Alexei Milchakov were welcome guests, and anti-fascist demonstrators were detained.

Vinnik and Glebov first got involved on Oct 11, devoting their program to an interview with Usach.  Glebov explains that they were – of course – showing the original images, swastika and all, and were interested to see what attempts would be made to get at them.

The interview is long and, in places, hilarious, though for reasons that are essentially disturbing.  At one point, for example, the prosecutor threatened to bring administrative proceedings against the Kukryniksy, three Soviet cartoonists responsible for a number of the cartoons Usach posted on VKontakte.  Usach was forced to explain to him that this would hardly be possible as they had all died long ago.  It was then that the prosecutor sent the case to the court.

Usach also notes the absurdity of the present situation.  She is being prosecuted, yet there is no chance of getting the police to do anything when a mobile phone is stolen, or an animal mistreated, and not much chance in cases of rape.

It does, however, depend who you are.  If Usach was facing harassment for the first time, not so Darya Polyudova.  The latter is a left-wing activist who has on many occasions been imprisoned and faced criminal charges over alleged ‘calls to separatism’ for trying to hold a peaceful march in support of greater local powers for Kuban  (see: Federalization as a ’Terrorist’ Act).

Polyudova reposted the video clip with the Usach interview and ended up also charged with propaganda or public demonstration of Nazi symbols.  On Oct 30, the court found her ‘guilty’ and ordered her imprisonment for 15 days.

The following day, Glebov and Vinnik began their program with an urgent announcement.  They ask the judge why he’s harassing a young woman when they are the authors of the video clip.   They demand Polyudova’s immediate release and that she receives an apology and compensation, and also that the judge is checked for his professional suitability for work in jurisprudence.

They end with words of encouragement for Darya, and the assurance that “fascism will not prevail”.  An echo from the past of devastating irony at a time when the Kremlin is cultivating Holocaust-denying, neo-Nazi and far-right movements throughout Europe, while any pretext is used for harassing and prosecuting anti-fascists.