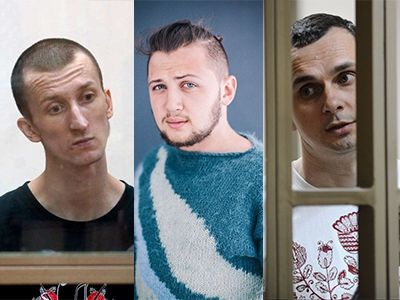 THERE ARE ADDRESSES AND A POSSIBLE MESSAGE AT THE BOTTOM

Those calling for ‘normalization’ of relations with Russia should spare a thought for Crimean Ukrainians whose lives have been torn apart by Russia’s annexation of their native Crimea.  Two of the ever increasing number of Russia’s Crimean political prisoners - Gennady Afanasyev and Oleksandr Kolchenko - will be spending their second birthday in Russian detention this month.  Our birthday greetings will show both them and Moscow that their cases are not forgotten.

Gennady Afanasyev will be spending his 25th birthday on November 8 entirely alone, in the maximum security part of Prison Colony No. 25 in Syktyvkar [Republic of Komi].  His mother, Olga, has just returned from the gruelling journey over several days to visit him.

As reported, Afanasyev was taken from the Rostov prison at the beginning of September and for almost a month neither his mother nor lawyer Alexander Popkov had any idea of his whereabouts.  The move to the maximum security section comes after he was placed in a punishment cell for 15 days.  The razor that the prison administration claimed to have found was almost certainly planted.

Sentsov, Kolchenko and Afanasyev were all involved in peaceful protest against Russian annexation and in measures to help Ukrainian soldiers who were effectively held prisoner in their barracks after Russian soldiers seized control of the peninsula.

They and historian Oleksy Chirniy, all Ukrainian nationals, were arrested in May 2014, and held incommunicado for weeks before being taken, against their will, to Russia.  On May 30 last year the FSB [Russian Security Service] accused all four men of involvement in a ‘Right Sector terrorist plot’, and pro-Kremlin television showed ‘confessions’ from Chirniy and Afanasyev.

It was clear from the first day of the trial of Sentsov and Kolchenko that the prosecution had absolutely nothing against the men, especially Sentsov who was charged with masterminding ‘the plot’.  The Memorial Human Rights Centre issued a statement in which it condemned the trial and recognized Sentsov and Kolchenko political prisoners.

The case entirely hinged on the two ‘confessions’.  For (initially) agreeing to ‘cooperate’ with the investigators, both Afanasyev and Chirniy were tried separately and received the minimum sentence for ‘terrorism’.  It should be stressed, and Memorial has, that none of the charges against any of the four constitute ‘terrorism’, and even the 7-year sentences are unwarranted.

On July 31, Afanasyev appeared in court and instead of refusing to testify, as the FSB had insisted he do, while standing by previously given testimony,  he stated that everything he had said before was a lie, and given under torture.

He later described the earlier torture and the pressure he had been put under before appearing in the courtroom.  See: Tortured for testimony against Sentsov-Kolchenko in Russia’s ‘Crimean terrorist plot’ trial

One FSB officer  ‘visited’ him and hit him very hard, and he was known to be facing immense pressure to claim that his retraction was given under pressure.  They threatened that if he did not cooperate, something bad could happen to his mother.

There is now an official investigation underway into Afanasyev’s allegations of torture.  Given the consistent refusal to consider analogous allegations made from the outset by Sentsov and Kolchenko, there are no grounds for optimism.

Afanasyev was probably forced into agreeing to Russian citizenship and has been sentenced by a Russian court.  The circumstances described above make it quite clear that his trial and sentence cannot be considered lawful and he should be released, together with Oleg Sentsov and Oleksandr Kolchenko.  The same, in fact, applies to Oleksy Chirniy who is also a victim in this case.

LETTERS to all three men are much needed!  Messages in Russian are most likely to get through, though short messages in simple English may also.  Whatever language, please avoid any comments about the men’s case or about politics!

ANY words of support will be appreciated and in Gennady Afanasyev’s case, they will give a crucial message to the prison administration and FSB that Gennady Afanasyev is not forgotten and that their behaviour is under scrutiny.

Please try to alert the media to this case and also ask your government to express its concern for Afanasyev’s safety and to demand that he, Oleg Sentsov and Oleksandr Kolchenko are released.