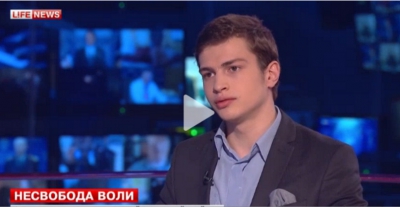 Life News recently presented this young Russian from Cherepovets as being an 18-year-old Ukrainian who fled to Russia to avoid being forced to fight in a “fratricidal war”.

The announcement that all Ukrainians living in Russia must regulate their legal status before the end of November coincided with the armed searches last week of the Ukrainian Literature Library in Moscow and the arrest of its Director Natalya Sharina.

The original notification from Russia’s Federal Migration Service [FMS] was cryptic enough to warrant caution before drawing conclusions.  More details are now available and they are worrying.  In January 2014 Russia introduced a ‘90/180’ rule for countries whose nationals do not require visas to enter Russia.  You can only stay for 90 days before leaving, and can only return 90 days later.  This rule kept being deferred with respect to Ukraine, and the news that no waivers would be applied, except in the case of people fleeing from the military conflict in Donbas came as a surprise.  Viktor Hirzhov, co-head of the organization Ukrainians of Moscow stressed in an interview to Radio Svoboda that kind motives for the earlier preferential treatment need not be suspected.  On the contrary, the rule was waived as part of the deliberate attempts to undermine Ukraine’s mobilization in the face of Russian aggression in Eastern Ukraine.  In January 2015, Russian President Vladimir Putin even stated that the time limit on being in Russia could be extended, especially for Ukrainians of mobilization age.

Hirzhov points out that the situation has now changed, with Russian focusing on Syria and relative quiet on the Donbas front.  “Now there’s a new task – to destabilize the situation in Ukraine, create social and political tension through pushing out people able to work, primarily men.”

FMS figures suggest that there are 2.5 million Ukrainians in Russia, however many Ukrainians will be living in Russia without registering.  The same is, of course, true of Russians living in Ukraine.  FMS talks of 600 thousand work migrants who must now receive a work permit, temporary residence permit or marry.  It is unclear how many will be unable to do so and will be forced to return to Ukraine without work, and quite likely without a place to live.   That is the aim, Hirzhov is convinced, with the disgruntlement generated to be used by opposition political forces. He believes that the Russian authorities are also trying to crush the Ukrainian Diaspora in Russia.  He himself was recently removed from a train returning to Russia and has been banned from the country for five years.  The attack on the Ukrainian Library then followed, and now these measures against migrants.

Radio Svoboda also spoke with Irina Biryukova, a Russian attorney specializing in migration legislation.  The situation, she says, has changed a lot recently, with far fewer Ukrainian nationals seeking any type of status in Russia.  Most interestingly, none of those seeking legal assistance has wanted to receive Russian citizenship. “On the contrary, they ask us to provide help in ascertaining what kind of status they can get in order to be here temporarily.  They plan to return home to Ukraine”.

She is also dealing with at least one family who were ‘automatically assigned Russian citizenship’ because they did not register their wish to retain their Ukrainian citizenship during the one month allowed for this immediately after Russia’s forcible annexation of Crimea.  They tried to renounce their unwanted Russian citizenship for six months before approaching her, and together they have been battling for a further half year.  From conversations and her impressions, Biryukova says, obstacles are put in the way of people trying to return to only Ukrainian citizenship.

Considerable pressure was brought to bear from the beginning on Crimeans to take Russian citizenship.  The fact that Russia is now saying that people have ‘automatically’ become Russian is a clear indicator that large numbers were in no hurry to do so.   Those who have rejected Russian citizenship, however, experience major difficulties with work, medical care, etc. in Russian-occupied Crimea.  Biryukova adds that even if such Ukrainians have Crimean registration, they will still be treated as foreign nationals and must ‘legalize’ their status in their native Crimea.

It should be stressed that Russia has already banned two Crimean Tatar leaders - Mustafa Dzhemiliev and Refat Chubarov from their homeland, and in December it ‘’deported’ Crimean rights activist Sinaver Kadyrov.   There are also a number of Ukrainian nationals who have been held in unlawful detention for well over a year.  It would not be surprising if many Ukrainians feel very nervous about approaching the FMS to ‘regulate their status’.

If, however, they ‘overstay’, then depending by how long, they could be banned from entering Russia for between 3 and 10 years.  Russia’s policy towards Ukrainians changed and radically, Biryukova says, when the military operation in Syria began.  They see it in court hearings on deportation.  If you’re Ukrainian, the court orders deportation.  Although people from Donbas are not expelled, they do get told unofficially to stop talking about the war, that instructions have been received from above, that there’s no war now and they need to legalize their status like ordinary foreign nationals.  Hirzhov notes that many of those who fled the fighting have been in no hurry to register, fearing that, like others, they will end up sent to places like Magadan with terrible conditions that nobody wants to live in.

The change is dramatic and came as a surprise to Biryukova and her colleagues who were expecting the preferential conditions to be extended to Jan 1, 2016.  She does not see any coincidence and points out that Ukrainian nationals had already stopped receiving temporary asylum.  In a case she is dealing with now, the mother had already received asylum, but two sons of conscription age have been refused.

This sudden change of policy and likely flood of people forced to return just as winter is setting in is yet another reminder that Russia’s bombs may be falling elsewhere, but its hybrid war against Ukraine is not over.