Russia’s ’Ukrainian Nationalist’ Show Trial: No Bodies, No Proof, but Good ’Confessions’Tourists Beware: Putin’s KGB-Kafkaesque Justice is for Foreigners Too24-year sentence in Russia’s ‘Ukrainian Chechnya fighter’ show trialThe Chilling side to Russia’s claims about Yatsenyuk as Chechnya fighterIn Putin’s next show trial, Ukrainians are cast as Chechnya separatist fightersWhere being Ukrainian is as good as being guiltyMoscow shouts ‘abduction’ yet holds Ukrainian hostages incommunicadoRussia holds 72-year-old Ukrainian hostage on absurd spying chargesRussian mother of 7 stands by her warning about Russian soldiers in UkraineRussian Mother of 7 accused of ‘treason’ released from custodyRussians call to release mother of 7 accused of revealing ’state secrets’Russian woman charged with ‘treason’ for reporting soldiers sent to UkraineRussian Newspeak: “Killed at exercises on the border with Ukraine”Russian soldiers’ deaths in Ukraine: A web of lies and fake social network pagesMore Russians aware that their sons are being sent to fight and die in UkrainePersecution of elderly activist exposing Russian soldiers’ deaths in Ukraine continuesRussian rights activist investigating soldiers’ deaths in Ukraine arrestedRussia continues lying about solders’ deaths in UkraineFirst reports on Pro-Kremlin TV of Russian soldiers killed in UkraineEntire Pskov paratrooper regiment killed in Ukraine?
• Topics / News from the CIS countries

Ukraine’s leaders can prove Russia’s Karpyuk - Klykh trial is farce - why don’t they? 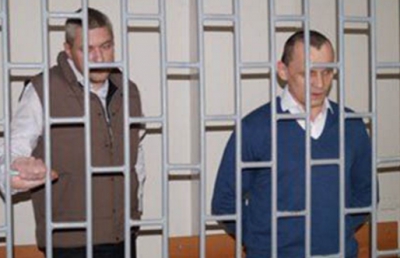 Lawyers representing Mykola Karpyuk and Stanislav Klykh, two Ukrainians held incommunicado for over a year and now on trial in the Russian Federation, have called on Ukraine’s Prime Minister and government to help ensure the men’s acquittal.  Not through political pressure, but by simply providing the facts to refute testimony obtained through torture.  The information needs to be presented within the month, but this should not be a problem since Ukraine’s Prime Minister Arseny Yatsenyuk was not murdering and torturing Russian soldiers in 1994/95, as Russia’s Investigative Committee is seriously claiming, after the men were tortured into saying so, and he can undoubtedly prove this.

Although Russia is holding at least 11 Ukrainians, some of whom have already been recognized by the Memorial Human Rights Centre as political prisoners, the Karpyuk – Klykh trial is unique in that it is being heard before a jury.  The public trials of Crimean filmmaker Oleg Sentsov and civic activist Oleksandr Kolchenko, and of Nadiya Savchenko have clearly demonstrated Russia’s judicial system at its worst, as did the secret trial of 73-year-old Yury Soloshenko who was sentenced to 6 years imprisonment on fictitious spying changes.  In all cases, judges have ignored crucial evidence proving the defendants’ innocence.  There is at least a greater chance that a jury will pay heed to the evidence and pass verdict accordingly.

Speaking at a press conference in Kyiv on Nov 7, the three lawyers – Marina Dubrovina, Klykh’s lawyer and Dokka Itslayev and Ilya Novikov, representing Karpyuk – had little that was positive to say about the authorities’ input up till now.  Itslayev explained that as his very first meeting with Karpyuk (on the eve of the trial), they had drawn up a list of the people who could confirm that Karpyuk had not been in Chechnya at the time claimed by the prosecution.  The list was sent to the Ukrainian authorities so that the people could be questioned, yet nothing was done.

Russian criminal procedure requires that a formal request for information be sent to Ukraine with this asking, among other things, for any evidence of the men’s involvement or non-involvement in the fighting in Chechnya during the relevant period.  That request was sent in June this year, yet Ukraine has still not answered.  Instead of just waiting for the men to be sentenced, as the Ukrainian authorities appear to be doing, they could be taking active measures to prove their innocence.  They should be collecting as much evidence as possible from witnesses who can testify that the men were elsewhere at the time, and also from people who actually fought in Chechnya and can confirm that Karpyuk and Klykh did not.

As reported here, Anastasia Stanko, a Ukrainian journalist, has looked into the case and spoken with precisely the kind of witnesses who are needed.  If she could do, then so too can the authorities.  Novikov stresses that this formal request from the Russian authorities is extremely important since the evidence will have to be added to the case.  When the defence puts forward proof of the men’s innocence, it is often not accepted.

The lawyers stress the importance, in the first instance, of Prime Minister Yatsenyuk’s testimony.  Following the scandalous interview given by Alexander Bastrykin, head of Russia’s Investigative Committee, in which the latter spoke of “proof” that Yatsenyuk was fighting in Chechnya along with Karpyuk and Klykh, Yatsenyuk’s response – that Bastrykin needed to see a psychiatrist – was understandable, but missed a crucial point (See: The Chilling side to Russia’s claims about Yatsenyuk as Chechnya fighter).  It was clear from that interview that the ‘case’ against Yatsenyuk was based solely on testimony provided by men held in custody. By demonstrating the absurdity of the accusations made against him, Yatsenyuk will confirm what the defendants themselves say, namely, that they said what was demanded of them under torture. The only other ‘evidence’ is in the form of testimony provided by Alexander Malofeyev, a person who did indeed fight in Chechnya, but who was later convicted of serious crimes in Russia and sentenced to 23 years imprisonment.  Malofeyev is HIV-positive, a drug addict and is suffering from hepatitis, and even just the threat to withdraw his medication would probably have been enough to persuade him to embellish his original testimony, adding Karpyuk, Klykh, Yatsenyuk and others  (See: 24-year sentence in Russia’s ‘Ukrainian Chechnya fighter’ show trial).

Both men have formally stated that their testimony was obtained under torture and have described the methods used, both to the court and in applications to the European Court of Human Rights. The situation is, however, anything but clear-cut.  Marina Dubrovina pointed out that the court was read the previous testimony despite the defence’s application for it to be excluded.  Both men have, after all, not only stated that they gave it under duress, but Klykh even showed the marks left on his body.  There is also medical evidence demonstrating that electric shocks were used on them.  She added that the defence had applied for a forensic medical assessment of the origin of the men’s injuries, but that the defence was not hopeful, as previous applications had been turned down.  In fact, Interfax-South reported the court’s press service as stating on Nov 6 that the court had agreed to such an assessment.

The Russian prosecution claims that Klykh and Karpyuk were members of the Ukrainian nationalist organization UNA-UNSO and that at the end of 1994 and beginning of 1995 they were part of an armed formation of the self-proclaimed Chechen Republic of Ichkeria and fought against Russian federal forces.  They are alleged, for example, to have tortured and murdered captured soldiers.  The Memorial Human Rights Centre has carried out an assessment of the charges and supposed crimes the men are accused of having committed, and demolished both.  It concludes that there is no evidence that any of the torture and atrocities even took place, nor that Mykola Karpyuk and Stanislav Klykh were involved (See: Russia’s ’Ukrainian Nationalist’ Show Trial: No Bodies, No Proof, but Good ’Confessions’