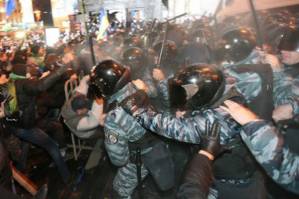 Attempts by Ukraine’s leaders to imitate decisive actions around the anniversaries of Euromaidan pose a real threat to proper investigation and significantly increase the likelihood of cases collapsing at trial level, or resulting in unwarranted acquittals.  This was the message from lawyers representing the victims of crimes against Euromaidan at on Nov 4.

The lawyers felt compelled to speak out after President Petro Poroshenko’s announcement that most Maidan investigations are nearly complete and ready to be passed to the court.  It is for the prosecution to decide when a case is ready for trial, and politicians of all levels should refrain from interfering.

The assertion itself regarding the state of the investigation is simply not true, they say, and any pressure on the investigators will place the investigation and, ultimately, conviction of the perpetrators in jeopardy.  Vitaly Tytych from the Advocacy Advisory Panel, pointed out that such consequences had already been seen at the time of the first anniversary.  Under huge pressure from the Prosecutor General’s Office, and against the judgement of the investigators themselves, one case over the gunning down of protesters on Feb 20, 2014 had been passed to the court prematurely.  Despite a huge amount of factual evidence having been gathered, it was not processed and added to the case in accordance with procedural norms. All of this has had a detrimental effect on the quality of the investigation and therefore on the court proceedings.  There are other concerns about this trial, see: Ukraine’s only trial over Maidan killings under threat

Nor do the lawyers believe such behaviour to be without ulterior motive.  Tytych notes that beginning a trial before the investigation has been properly carried out and all evidence in place is a tried and tested way of ensuring that the case gets returned to the prosecutor’s office, or results in acquittals.  Such prosecutions, he adds, normally involve those at the lowest level.  If the evidence has not been properly gathered and the prosecution is therefore unable to prove that the person acted as part of a criminal group, then it will not be possible to bring those who ordered the crime to justice.

It is also standard for the investigators to leave out a lot of evidence, using only the testimony of victims and the protocols from interrogation of suspects.  The lawyers see this as deliberate action by the investigators to discredit the weight of evidence.  They will continue trying to impede such behaviour but hope that public attention to the irregularities they uncover can also help.

Roman Maselko, for example, explained how public protest over the termination of a large percentage of cases brought against traffic police inspectors for their persecution of Automaidan activists had led to a number of these being reinstated.  Several cases were even passed to the court, with one person even convicted.  This was presented as a significant achievement, yet the conviction was overturned at appeal level, with the evidence found to have not been formalized properly.  All 50 cases handed to the court were returned to the prosecutor’s office due to the same irregularities.   They are now being shuffled between different departments.  The only positive move came when Prosecutor General Viktor Shokin finally agreed to unite the cases, although it took until October 2015 for this to be carried out.

The fact that cases involving individual traffic police officers had all been separate is surely an indication of the lack of any real motivation to carry out a real investigation and prosecutions.  Individuals who obey criminal orders should certainly answer for their actions, but so to should those at higher level who deployed the traffic police during Euromaidan, not to mention the judges who colluded with them.

Ongoing obstacles to real prosecution were outlined by Yevhenia Zakrevska.  She explained that in practice only some 18 people are in fact investigating around 2 thousand episodes during Euromaidan.  The investigators are working in impossible conditions, with a shortage of computers and other technology, and no system in place for storing the enormous amount of video and other digital material, as well as other evidence.

There is little coordination between different groups with investigators largely concentrating only on the specific episodes they are responsible for.

The Advocacy Advisory Panel has run up against various obstacles from the Interior Ministry and Zakrevska notes that their requests for information increasingly go unanswered.

The Special Investigations Department which was finally created late last year was intended to be an independent body, yet it remains vulnerable to attempts to take control from the management of both the Prosecutor’s Office and the Interior Ministry.   The reason is disturbing: many of those under investigation are continuing to work in the enforcement bodies.  An initial investigation into the destruction of documents about the case over the Berkut unit headed by Dmytro Sadovnyk and accused of shooting 39 activists on Instytutska St proved superficial and a mere formality.  The Advocacy Advisory Panel managed to get a second investigation initiated, but only after considerable effort and serious resistance from Avakov himself.

The new investigation concluded that the original one had been inadequate and carried out with serious infringements.  Nobody was identified as responsible for this or in any way penalized.

The creation of the Special Investigations Department remains the main achievement, but the lawyers believe that the country’s leaders lack the political will to carry out an objective investigation into the crimes committed during Euromaidan.