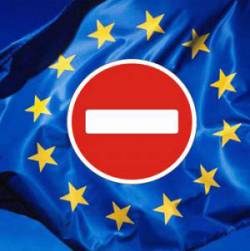 The Verkhovna Rada tried and failed twice on Tuesday to pass an amendment banning discrimination in the workplace on any grounds, including sexual orientation.  If the absence of a number of MPs during the previous attempt on Nov 5 seemed suspicious, on Tuesday it could be confidently called sabotage – of Ukraine’s prospects for European integration.

Ukraine risks losing the chance of having visa requirements for the EU waived because of this extraordinary failure.  It should be stressed, and was by MPs supporting the amendment, that the amendment is entirely innocuous, banning only discrimination in the workplace on, among others, the grounds of sexual orientation.

There was supposed to be a closed meeting of Ukrainian and EU diplomats in Brussels which would have taken the crucial decision as to whether the EU would announce the suspension of visa requirements for Ukrainians by the end of 2015.   The European Commission announced that the meeting was being postponed on Nov 9, giving Ukraine’s parliament another chance to pass the relevant amendments.  Others were adopted on Tuesday, but not the anti-discrimination amendment.   At the first vote it was supported by 206 MPs, at the second by 207.

This amendment should have been uncontentious.  It bans only discrimination which is, in any case, against Ukraine’s Constitution which Ukraine’s MPs are required to respect*.  It is also a direct requirement for European integration which was what so many Ukrainians upheld their right to in the autumn of 2013/14 during Euromaidan.  It was on the wave of Euromaidan that a lot of politicians entered parliament for the first time or were re-elected, and it is profoundly frustrating that they should have forgotten this.  They may not be affected by the visa restrictions, but other Ukrainians are.

The list of MPs who voted for or against, those who abstained, as well as those who were absent can be found here.

The lowest support was given by the Samopomich Party, one of the apparent pro-reform parties that emerged after Euromaidan.  8 MPs voted for, none against, however 8 abstained, and a whopping 10 were ‘absent’.

This was a critical vote, and the absence of so many MPs is difficult to justify.

The results for the populist ‘Radical Party’ headed by Oleh Lyashko were even more dismal.  One MP voted for this pro-Europe, anti-discrimination amendment; 2 voted against; 5 abstained, 8 did not vote, including Lyashko, while 5 were absent.

Worth noting that these two supposedly pro-Ukrainian parties were united with the Opposition Bloc, representing the old ruling Party of the Regions.  There not one MP voted for the amendment; 11 voted against.  8 abstained, 20 did not vote and 4 were absent.

Of non-party affiliated candidates, 13 voted for, 8 against; 4 abstained, 11 did not vote and 15 were absent.

There was considerably more support from four factions.

Of the 19 MPs in Yulya Tymoshenko’s Batkivshchyna Party, 13 voted for, none against, but one abstained and 5 were absent.

The list of those who either voted against, or chose to defeat the bill through their abstention, failure to vote or failure to appear in parliament contains many MPs who were elected because of their support for reform and European integration.

They failed a fundamental test of parliamentary democracy on Tuesday.

*   Discrimination is specifically prohibited on racial, political and religious grounds, as well as on the basis of gender, sexual orientation, family or financial position, participation in strikes, or because of suspected or confirmed AIDS.