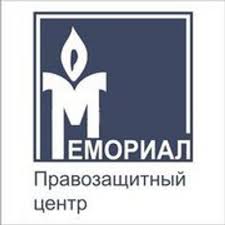 Russia’s Justice Ministry has accused the renowned Memorial Human Rights Centre of undermining the foundations of the Russian Federation’s constitutional order and calling for the overthrow of the regime.  This latest attack comes just days after the same ministry forcibly added the St Petersburg-based Memorial Research and Information Centre to its notorious list of so-called ‘foreign agents’.

The Memorial Human Rights Centre [Memorial HRC] was labelled a ‘foreign agent’ in 2013.  According to the draconian law passed in 2012, the label is applied to any NGO which receives foreign funding while engaging in what the authorities claim are  ‘political activities’.  Memorial HRC has no political agenda at all, but it has for many years monitored human rights abuse in Chechnya and the northern Caucuses, and politically motivated prosecutions throughout the Russian Federation and, recently, Russian-occupied Crimea.

The Ministry’s new accusations follow a ‘check’ on Memorial HRC carried out by the Ministry’s Moscow officials because of this ‘foreign agent’ status.  Alexander Cherkasov, head of Memorial HRC, explains what such serious allegations are based on.

The formal document following a check on Oct 5 accuses the organization of “undermining the foundations of the constitutional order” by forming negative public opinion “regarding the state policy undertaken by the highest bodies of State power; by expressing disagreement with the decisions and actions of the said Institutes of power, with the results of criminal investigations and court verdicts on high-profile criminal cases”.

Cherkasov points out that his organization gathers factual information, on the basis of which it makes assessments, etc.  In so doing it is exercising the freedom of speech, opinion, and association guaranteed by Russia’s Constitution.

“We do not consider it appropriate to remain silent if we see that representatives of the authorities, including the country’s leaders, are violating human rights and international law.”

It is this, he notes, that the Ministry is claiming “undermines the foundations of Russia’s constitutional order”.

The document, for example, cites specific examples to back its claim that Memorial HRC is seeking to overturn the regime, by forming negative public opinion. .

On July 29, 2014, Memorial HRC stated on its official website that Russia’s actions against Ukraine fall under the definition of aggression.  “In the view of the organization’s leaders, there was direct engagement by Russian soldiers in fight on the territory of another country. – against the legitimate authorities of a neighbouring country”.

The same Ministry officials note that Memorial condemned the sentence passed by a Moscow court over the so-called 2012 anti-Putin protests on Bolotnaya Square.   They repeat the authorities’ claims about the protests, then conclude that Memorial HRC “is expressing disagreement with a verdict passed by the Zamoskvoretsky District Court in Moscow, in the name of the Russian Federation, with respect to the above-named individuals who organized Mass riots, took part in them, called others to mass riots and violence against citizens, and to active participation in mass riots”.

Quite some rabble-rousing and seditious behaviour from a human rights organization, you might think.  Or you might not, since the assessment given by Memorial HRC of the Bolotnaya Square prosecutions has been echoed by Amnesty International and other international NGOs.

As far as Memorial HRC’s unkind or subversive use of the term ‘aggression’ about Russia’s annexation of Crimea is concerned, its assessment is that given by the international community and reflected in the UN General Assembly’s Resolution of March 27, 2014.

Cherkasov points out that the supposed “view of the organization’s leaders” regarding direct involvement by Russian soldiers in fighting in eastern Ukraine is based on numerous irrefutable facts.

Those facts, first revealed by Lev Shlosberg, Soldiers Mothers of St Petersburg and Ludmila Bogatenkova, have now been confirmed in numerous studies and reports from NATO, Igor Sutyagin at the Royal United Services Institute [RUSI], Amnesty International, the associates of Boris Nemtsov who was gunned down before he was able to prepare his report, and many others.

Telling the truth is dangerous in today’s Russia, and Shlosberg, Bogatenkova and others have come under attack for their work in uncovering soldiers’ deaths in eastern Ukraine.

On Nov 10, the Supreme Court’s appeal chamber overturned a final appeal against Russian President Vladimir Putin’s decree classifying information about military losses in peacetime.   That decree and the total lack of clarity as to what information will be deemed secret, has already resulted in many relatives of soldiers killed refusing to talk to human rights activists or journalists.  They fear, understandably enough, that they can now be prosecuted for state treason.

The threat itself is enough to silence many.  It is possible that the latest offensive against the Memorial HRC is a similar attempt to cower outspoken human rights activists into silence through allegations which, should they turn into criminal charges, could result in long prison sentences.

Threats will not succeed.  In a statement on Nov 10 entitled “We are Memorial”, prominent Russian human rights activists stated clearly that they share the views expressed by Memorial HRC on all the subjects mentioned in the document.  “Russia’s policy with regard to Ukraine is aggressive and in breach of international norms; Russian soldiers have taken part in military action in the East of Ukraine; the Bolotnaya Square case was fabricated with the verdict passed unlawful”.

They affirm the duty of human rights activists to point to violations of domestic and international law by state bodies at any level, and to fight for observance of the law.

They point out that human rights activities are protected by Russian legislation and international agreements which the Russian Federation has ratified, and call on the Human Rights Ombudsperson and the President’s Human Rights Council to react as a matter of urgency to these accusations against Memorial HRC.  The Justice Ministry should withdraw its allegations and apologize.

This is not the first assault on Memorial and its Human Rights Centre whose commitment to truth about Russia’s past and present are anathema to the current regime, and public outcry and unequivocal statements of solidarity are urgently needed.