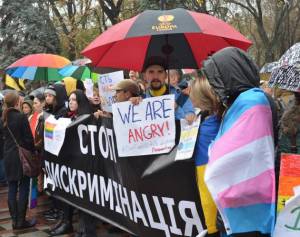 A fourth attempt to pass a vital ban on discrimination in the workplace has finally succeeded, with the amendment receiving 234 votes, 8 more than the minimum required.  The amendment specifically bans discrimination on the grounds of sexual orientation, and it was this that uncovered a worrying level of homophobia among Ukrainian MPs.

The amendment, as passed, is to the Labour Code and was required for Ukraine’s chances of having EU visa requirements waived.  All other required amendments were hopefully adopted in a form which the EU will accept on Nov 10, but the anti-discrimination amendment proved too much of a hurdle for many MPs.

The norm passed prohibits “any discrimination in the labour sphere, including violation of the principle of equal rights and opportunities, direct or indirect restriction of employees’ rights on the basis of race, skin colour, political, religious and other convictions, sex, gender identification, sexual orientation, ethnic, social and foreign origin, age, state of health, disability, suspected or known HIV or AIDS, family or financial position; family commitments; place of residence; or participation in strikes”.

Journalist Maxim Eristavi has suggested that people are celebrating too soon.  He points out that the amendment was added to the old Labour Code which is to be replaced by the new one which has yet to be passed in full.  He sees Thursday’s vote as a trick to deceive the EU and the LGBT community.  Judging by the comments not everybody is so pessimistic.  The initial failed vote was on adding the anti-discrimination norm to the agenda for the second reading and that could probably not be overridden. That does not mean that once a norm is in place it can easily be removed, and indeed Ukraine’s Constitution specifically prohibits the diminishing of existing norms.

What is, however, true is that there are few mechanisms in place in Ukraine for fighting actual discrimination and it is not guaranteed that this amendment will, in the short term, achieve very much.  It does, nonetheless, seem an important elucidation of the constitutional ban on discrimination.

It is also an absolute requirement for visa liberalization which meant that the MPs from across the party spectrum who kept voting against the amendment – either directly or through their failure to vote or even appear in parliament  - were going against the move towards European integration which had impelled the Euromaidan protests and effectively brought many of them into parliament.

A breakdown of the unsuccessful votes on Tuesday can be found here   The MPs then ignored not only the EU requirements, but also the considerable number of demonstrators outside the Verkhovna Rada calling on them to pass the bill.

During the vote on Nov 12, not one Opposition Bloc MP [representing the former ruling Party of the Regions under Viktor Yanukovych] voted for the amendment, with 23 voting against, one abstaining; 9 not voting and 10 absent.   The Radical Party of Oleh Lyashko also gave only one vote for, and one against;  8 abstained, while 8, including Lyashko did not take part in the vote, and a further 5 were absent.

A major difference during this vote was from the Samopomich Party, whose pro-Europe and pro-reform members had startled during previous votes.  This time 15 voted for the amendment and none against, however 5 abstained, 1 did not vote and 5 were still absent.

The battle to get the norm adopted was worryingly fierce, and there was obviously serious pressure on parliamentarians from other quarters, including, it seems, from the Church.  As reported here, even MPs who voted in favour of the amendment during the first vote on Nov 5 clearly felt the need to justify their position.

There was then, and has been since, a lot of disinformation and prejudice, and it is indicative that Speaker Volodymyr Groisman on Thursday saw the need to stress that the amendment was not some kind of carte blanche for single-sex marriages.