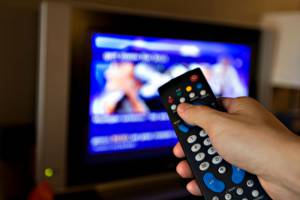 While pressure mounts on Ukraine to agree ‘elections’ in areas under Kremlin-backed militant control, the so-called ‘republics’ are making no pretence of planning to hold them in accordance with democratic standards.  On Nov 12, Viacheslav Stolyarenko, ‘information minister’ of the ‘Luhansk people’s republic’ [‘LNR’] announced a ban on a number of Ukrainian television channels, claiming that these “discredit the Republic”.

Stolyarenko stated that the order banning the channels was prompted by “reports broadcast by the television channels over the last two months which are aimed at discrediting both the government of the Luhansk people’s republic, and its officials, ordinary citizens and, in fact, its very statehood.”

He asserted also that Kyiv “has activated its information attacks”, and claimed it was spreading disinformation.  He gave no examples.

Such restrictions are nothing new.  In June, while announcing that they wanted ‘special status’ within Ukraine, the so-called ‘Donetsk people’s republic’ announced that the local Internet provider was being forced to block 39 websites in Donbas.  The list had in fact only been extended from the 27 sites blocked in September 2014.  The new sites deemed to be ‘inciting inter-ethnic enmity’ and engaging in “slander” included Radio Svoboda, Informator.lg.ua, Liga.net and others.  .

A number of the journalists working for the blocked sites are, in fact, from Donbas but were driven out of the area through threats or direct attacks. IMI’s monitoring in 2014 reported at least 34 attacks on media in Donbas that refused to cooperate with the self-styled ‘republics’.  Some were also held hostage for considerable periods of time, and 30-year-old journalist Maria Varfolomeyeva, seized in January, remains imprisoned and tormented for Russian propaganda channels.

Germany’s Foreign Affairs Minister Frank-Walter Steinmeier has acknowledged media freedom as one of the five thorniest issues regarding possible elections in the so-called ‘republics’.

The others, Vladimir Socor from the Jamestown Foundation writes, are as follows:

1) Voter status of internally displaced persons (IDPs) who fled Donbas.  Kyiv insists that they must have the right to vote, and the right to stand for office.

2) “Eligibility of political parties to enter their candidates.

3) Election monitoring. Most worryingly, Steinmeier raised the question in his readout of the Normandy meeting on Nov 6, apparently suggesting the possibility that the monitors would not be from the OSCE.  Where the militants and Russia would get ‘observers’ from has already been seen, with those invited to give their stamp of approval to the so-called Crimean ‘referendum’ and illegal elections on Nov 2, 2014 being mainly from far-right, even neo-Nazi European parties.

Judging by the militants’ open contempt for freedom of speech, that too appears to be regarded by France and Germany as expendable.