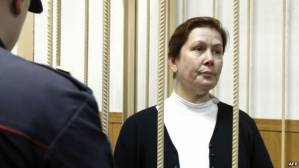 The authoritative Memorial Human Rights Centre considers Natalya Sharina, Director of the Ukrainian Literature Library a political prisoner and calls for her immediate release and for termination of the criminal charges against her.  Her lawyers have also pointed to quite staggering irregularities in her arrest.

The following day Russia’s Investigative Committee reported that the 58-year-old librarian was accused of ‘inciting national enmity or hatred, and also denigrating human dignity” (Article 282 § 2b of the Russian Criminal Code).  The charges can carry a sentence of up to 5 years imprisonment. The Investigative Committee asserted that from 2011-2015, Sharina, as Director of the Ukrainian Literature Library, “circulated among visitors books by Dmytro Korchynsky designated by the court as extremist material and prohibited for use”.  Printed matter was also allegedly removed which was claimed to contain “calls to anti-Russian state and anti-Russian propaganda”.

The word ‘allegedly’ is critical here since both Sharina and her colleagues at the library insist that the material ‘found’ was in fact planted on them.  Tatyana Muntyan, told UNIAN’s Moscow correspondent that the book by Korchynsky had been taken away during a search in 2010 and had not been returned.

Memorial HRC points out also that only one book by Korchynsky is on Russia’s substantial List of so-called ‘extremist materials’.

“The criminal proceedings against Natalya Sharina have taken place against the background of the anti-Ukrainian campaign continuing since Spring 2014 in the state-run media and in utterances made by public officials holding high posts in the Russian Federation’s leadership.  One of the parts of this campaign is to initiate criminal cases against citizens publicly expressing a position on what is happening in Ukraine that differs from the official position or in any way linked with Ukraine. In our opinion, it is specifically in the light of this anti-Ukrainian campaign that the case of Natalya Sharina should be viewed, ” Memorial says.

It calls criminal prosecution of the director of a library over material (allegedly) held in the library and deemed extremist as new repressive practice.  The article that she is charged under envisages punishment for actions aimed at inciting hatred or enmity, or denigrating dignity which, in Sharina’s case, Memorial says, is difficult to imagine even theoretically.

Sharina is fortunately represented by well-known human rights lawyer Ivan Pavlov and his colleague Yevgeny Smirnov,  They have already lodged a formal demand for the prosecutor to react over flagrant infringements of regulation.  Charges against Natalya Sharina were separated out into an individual criminal case (presumably from a general case against the library) at 2 minutes to midnight on Oct 28.  Literally, at 23.58.  That, however, was only the first step.  The investigators supposedly managed in the space of two minutes to conclude a further 5 procedural steps involving the case being sent back and forward between different investigative bodies.

The treatment of Sharina was also in breach of all Russian and international norms. She was held in a police station for two days, most of that time deprived of food, water and sleep, and had been .  During the court hearing on Oct 30, the prosecutor asked only for a signed undertaking not to leave Moscow, without any other restriction.  This clashed with the demand from the Investigative Committee (the same body which has played an active role in the prosecutions of Nadiya Savchenko and other Ukrainian hostages in Russia) for remand in custody.  The court was clearly loath to buck the Investigative Committee, which is headed by Alexander Bastrykin, a close associate of Russian President Vladimir Putin, and placed her under house arrest for two months.

It is sadly ironical that Natalya Sharina, a Russian national who apparently does not even know Ukrainian, was taken on after a previous offensive against the Ukrainian Literature Library – as more ‘reliable’.  Now she, like Ukrainians in Russia who have suddenly been told they must sort out their status by the end of November and who likely face mass deportation, has fallen victim to Moscow’s ongoing attack on Ukraine.